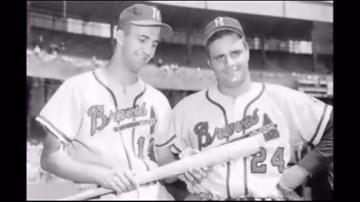 MILWAUKEE--Joe Torre was honored this Thursday with a plaque during a ceremony at Miller Park to induct him into the Milwaukee Braves Honor Roll.

Torre, best known for winning four World Championships as the manager of the New York Yankees, actually  played the first six years of his 18-year major-league career in Milwaukee.

Torre signed with the Milwaukee Braves in 1959 and over his nine-year career with the team he hit .294 with 142 home runs and 552 RBIs. He made nine All-Star teams during his career, including three in Milwaukee.

Torre will also be inducted into the Baseball Hall of Fame in Coooperstown, New York this July.