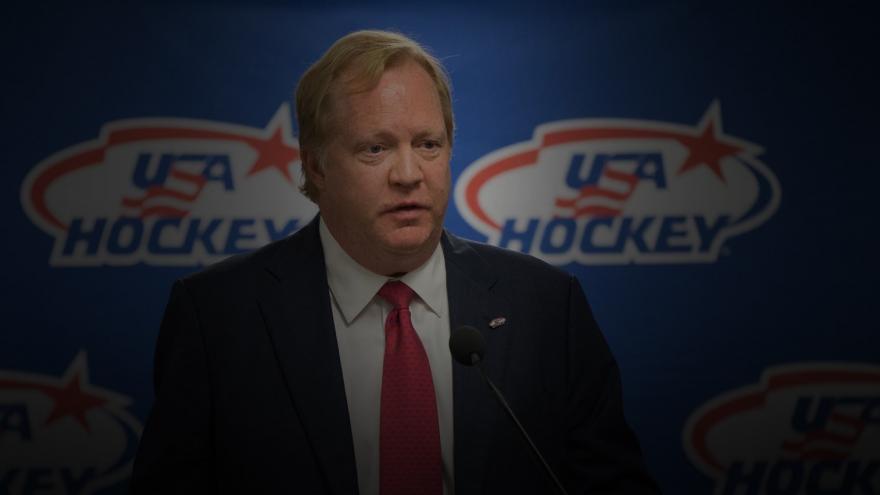 COLORADO SPRINGS, Colo. -- Jim Johannson, assistant executive director of USA Hockey and the general manager of the 2018 U.S. Olympic men's ice hockey team, passed away in his sleep early this morning at his home in Colorado Springs.

Johannson, born March 10, 1964, in Rochester, Minnesota, had a life-long career in hockey and was one of the most accomplished and respected people in the sport.

"We lost a true friend in Jim Johannson today," Wisconsin and U.S. Olympic coach Tony Granato said. "He was so compassionate and as loyal a friend as you could have. He was the ultimate teammate.

"I am deeply saddened and shocked and sorry that he is no longer with us. He was a special human being. Please pray for Jim's wife and daughter, Abby and Ellie."

"We are beyond shocked and profoundly saddened," said Pat Kelleher, executive director of USA Hockey. "As accomplished as Jim was in hockey, he was the absolute best, most humble, kind and caring person you could ever hope to meet. His impact on our sport and more importantly the people and players in our sport have been immeasurable. Our condolences go out to his entire family, but especially to his loving wife Abby and their young daughter Ellie."

Johannson came to USA Hockey in 2000 after spending five years (1995-2000) as the general manager of the Twin Cities Vulcans, a Junior A team in the United States Hockey League. Under his guidance, the Vulcans captured the 2000 USA Hockey Junior A National Championship in Green Bay, Wisconsin.

Johannson began his career at USA Hockey as manager of international activities and U.S. Olympic Committee relations, was promoted to senior director of hockey operations on August 5, 2003, and on June 25, 2007, assumed the position of assistant executive director of hockey operations, where he had oversight of all in-sport related initiatives, including USA Hockey's efforts in putting teams on the field of play for international competition.

Among the numerous accomplishment during his tenure, among the most significant were capturing 64 medals in major international competition, including 34 gold, 19 silver and 11 bronze; the launching and implementation of the highly acclaimed American Development Model; and securing USA Hockey Arena in Plymouth, Michigan, as a home for all U.S. teams to utilize.

"Jim's positive influence was enormous and will be felt for generations to come," said Jim Smith, president of USA Hockey. "He was widely respected across the world and his genuine nature helped advance our sport in so many ways. Today, we are a medal contender every time we put a team on the ice for international competition, and he played a major role in helping us get to that point. Our heartfelt condolences go out to his entire family. It's a sad day for all of us."

"There are few like Jimmy," said Ron DeGregorio, chairman of the board of USA Hockey. "Our sport was so lucky to have him. He was as good of a person you'll meet and he played such a significant role in helping move our sport forward. Today is a tough day for everyone. To Abby and Ellie and the entire Johannson family, our thoughts and prayers are with you today and always."

Johannson played college hockey at the University of Wisconsin from 1982-86 and helped the Badgers capture the NCAA title as a freshman. He was selected by the Hartford Whalers in the 7th round (130th overall) of the 1982 NHL Draft and went on to play 374 games of professional hockey between 1987-94 in the International Hockey League where he registered 279 points, including 119 goals.

He twice played for the U.S. in the Olympic Winter Games (1988, 1992) and was also a member of the U.S. Men's National Team that participated in the 1992 IIHF Men's World Championship.