Jen Welter on coaching in the NFL: 'Now it's possible' 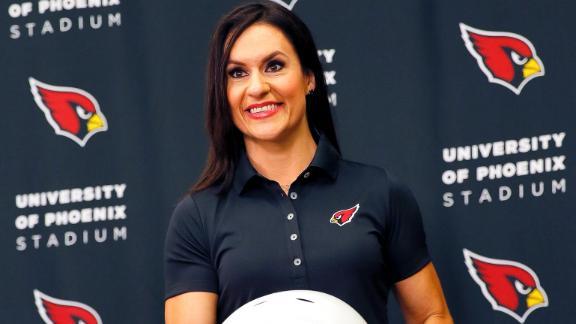 (CNN) -- Jen Welter broke what was once seen as an impenetrable glass ceiling in the sports coaching ranks: She became what's believed to be the first woman to hold a coaching position of any kind in the NFL, working with the Arizona Cardinals' inside linebackers throughout training camp and the preseason.

So how does she sum up her time as an NFL coach now that her internship is complete?

\"Better than I could have possibly imagined,\" Welter told CNN's Rachel Nichols. \"I love those guys. I love the team. From start to finish, it was exciting. They were respectful, they were receptive, and we all became really good friends with a lot of football and respect in between.\"

Not so long ago, women in the media had trouble even covering the NFL and other sports, much less ever getting into the coaching ranks. Back then, women couldn't receive respect from NFL players as sports writers and television reporters. Now, Welter was coaching with the Cardinals, telling players what to do. Why did that work for her?

There's no doubt that it's different now. Becky Hammon and Nancy Lieberman are assistant coaches for the NBA's San Antonio Spurs and Sacramento Kings, respectively. This summer, Hammon led the Spurs to the Las Vegas Summer League title as a head coach. In tennis, Andy Murray's coach is Amelie Mauresmo, who became just the second woman to coach a top-10 men's player.

In fact, Welter wasn't the only female pioneer in the NFL this season. Sarah Thomas is the NFL's first female official, and she will be a line judge for the 2015 season.

But the NFL coaching barrier was undoubtedly a tough hurdle for a woman to clear. The first test for Welter was proving she belonged.

From her previous experience as a player -- Welter played 14 seasons of professional football, mostly in the Women's Football Alliance -- she knew that just being on the Cardinals' coaching staff wasn't going to automatically earn respect. At first, she just watched. Soon, Welter said, she figured out that she could help players in certain areas, such as technique.

\"If they try what I gave them, and it worked, they'd come back and they'd be like, 'Coach,did you see that?'\" Welter said. \"'Man, that worked. What else do you got?' And it kind of just slowly evolved that way.\"

It also helped that Welter -- who had also made history in 2014 when she had carries at running back for the Texas Revolution of the Indoor Football League, a men's league -- had been in the trenches. They wanted to know about her. They watched film of her playing days. When there was down time to talk, Welter and the players shared their lives and stories, \"because they were curious about me,\" Welter said.

Welter also connected to her Cardinals players in a way that no one else had ever done for them before. Before every preseason game, she left them handwritten notes in their lockers, saying it was something she would have liked back when she played. With linebacker being such a mentally heavy position -- it's similar to being the quarterback of the defense -- Welter saw some \"paralysis by analysis\" in some of the younger players. Welter wanted to reinforce the things they had talked about during the week with those locker room notes.

\"They loved it,\" Welter said. \"And I found that out because they shared it with the media. I didn't share it. I wouldn't have because that was personal; that was from me to them. But they did.\"

Originally turned down an opportunity

Welter said despite playing football for 14 years, it was never a dream to coach. She never even contemplated it. How could she possibly have dreamed about something like that as a girl, about something that just didn't happen?

Instead, it was a former NFL player who convinced her that she should take the plunge. Wendell Davis, coaching the Texas Revolution, told Welter he had seen how the players had responded to her and knew her passion and knowledge of the game.

Welter said she originally told Davis no to his coaching offer, but Davis said he had already told the players that Welter would do it.

And with that, in February, Welter became the first female coach in a men's professional football league, coaching linebackers and special teams.

At the NFL owners meetings in Arizona in March, Cardinals head coach Bruce Arians was asked about the possibility of women coaching in the NFL.

\"The minute they can prove they can make a player better, they'll be hired,\" he said.

Soon after that, Arians heard from the Davis, saying the organization had a woman on the coaching staff that was worth a look.

Welter -- who holds a master's degree in sport psychology and a doctorate in psychology -- believes that while the playing component will be key in terms of other female ground breakers, there could be other paths for women to NFL coaching staffs, as there are educated men and women out there who learned the game despite not playing.

\"You can learn it without playing,\" Welter said. \"But I think for the first woman to be kind of that figurehead, I think they'll have to kind of see the highlights, kind of be without a doubt, like this was a ballplayer and I respect this person beyond gender. I respect them for what they did for the game. I think when you have that, it will open up the doors and make them more receptive.

\"We now proved that guys can be coached be women. We've proved that without a shadow of doubt. So now that opens the door to other women who really knew their stuff.\"

So now that history has been made, how does it change for girls? The answer is in how they dream.

Much like the women who stepped into the then-forbidden world of working in the sports media, girls can now see that working as an NFL coach is a viable option.

\"It's another dream that we as women, especially in sports, have been very limited in what we can dream. And now it's possible. And that's the best thing to know. Because though it wasn't a dream I had, now every little girl who loves football can grow up with that dream or one similar.\"