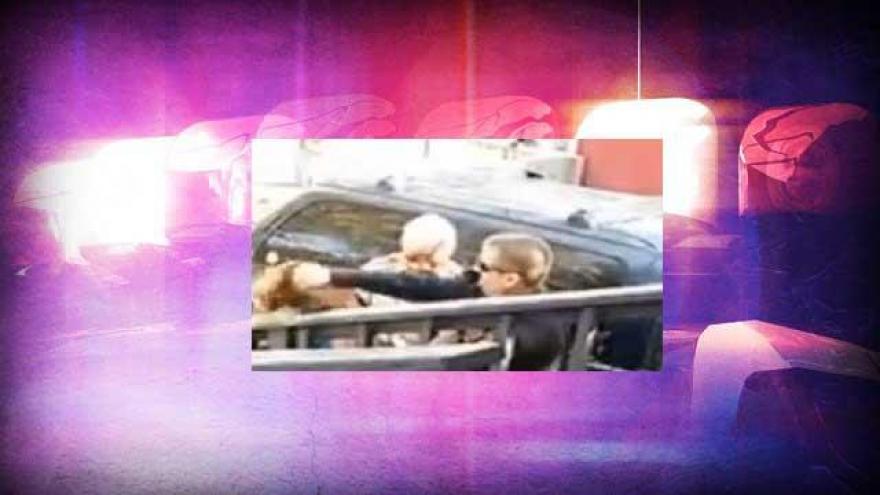 (CBSNews) FLAGSTAFF, Ariz. -- Arizona police say an officer is being investigated after video surfaced that shows him striking a woman in the face during an arrest.

Flagstaff police say in a news release that officer Jeff Bonar has been placed on leave pending the probe.

They say “our agency is very concerned by what is depicted in this video.”

Cell phone video apparently shot by an onlooker and posted on Facebook shows her struggling with two officers.

At one point one of men strikes or punches her in the mouth area. She is eventually placed in a squad car.

Sedillo told the station he and his girlfriend, Marissa Morris, were moving their belongings across the street when at some point, an officer tried to arrest Morris on a warrant.

According to Sedillo, Morris tried to explain to the officer that there was some sort of mistake and refused to go with him until he showed her the warrant and explained what it referenced.

“He literally tackled her in front of my mom’s house,” Sedillo said.

The scene was caught on cell phone video. The video shows the officer attempting to physically move Morris, and she appears to resist until he strikes her in the face.

“She weighs maybe 110 pounds, maybe the officer was maybe 220,” Sedillo said. “He went (about) the whole thing all wrong.”

Sedillo said Morris was eventually arrested for assaulting an officer and resisting arrest. She remains behind bars, KPHO says.