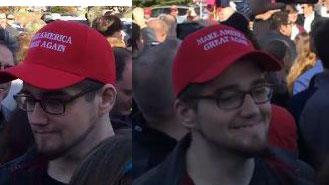 UPDATE: The Janesville Police Department is seeking the public's help in identifying an individual in reference to a possible assault that occurred at the Donald Trump Political Rally in Janesville on Tuesday.

(CBS NEWS) A teenage girl was allegedly sexually assaulted and pepper-sprayed outside of a Donald Trump campaign rally in Janesville, Wisconsin on Tuesday, according to the Janesville Police Department.

In a statement, the police department said: "A 15 year [old] girl from Janesville was peppered sprayed in the crowd by a non-law enforcement person... A male in the (crowd) groped the 15 year [old] girl, when she pushed him away; another person in the (crowd) sprayed her. We are currently looking for two suspects, one for the sexual assault and one for the pepper spray."

Video of the pepper-spraying incident was posted to a Janesville community Facebook page late Tuesday.

In the video, a blonde girl screamed at a man in the crowd that "you f***ing touched my chest." Later, the man denied the accusation, putting his hands up and saying, "I never touched her."

Approximately 30 seconds in, another member of the crowd sprays the teenage girl's face in close range.

Another video posted on Twitter shows the blonde girl appearing to throw a punch at someone off-screen moments before she was pepper-sprayed.

Janesville Police Sgt. Aaron Ellis told the Associated Press Wednesday that the girl told police she punched the man who groped her, named by the Wisconsin State Journal as Dan Crandall of Milton.

The incident took place outside the Holiday Inn Express and Janesville Convention Center, where over 1,000 supporters gathered at a Donald Trump rally held Tuesday afternoon. About a thousand more attendees, including both supporters and protesters, convened outside the venue.

On Monday night, six protesters were arrested by the Janesville Police Department after refusing to leave the venue's lobby as part of an anti-Donald Trump protest. Trump, for his part, was campaigning in Wisconsin as part of a last-minute bid for support ahead of the state's primary on April 5.

The alleged assault of the teen girl is only the latest in a string of violent incidents and assaults by his supporters at the GOP front-runner's events.

Just this week, Trump's campaign manager Corey Lewandowski was charged with "simple battery" after he grabbed and allegedly bruised a former Breitbart reporter earlier this month at a press conference.

Trump stuck by Lewandowski after the charge, even threatening to sue the reporter after she tried "to grab me and shout questions."

The Trump campaign did not immediately respond to a request for comment about the Janesville Police Department's investigation.