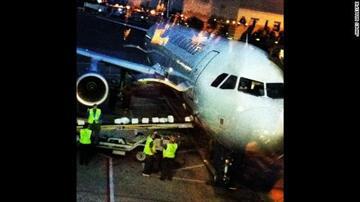 New York (CNN) -- Passengers on a delayed flight at New York's LaGuardia Airport were understandably a bit crabby for a while Thursday evening -- and it wasn't because of the weather or a maintenance issue.

U.S. Airways Flight 890, set to depart at 7 p.m., was delayed a half hour after \"a good number\" of little crabs were \"running amok in the cargo hold,\" said Josh Freed, spokesman for American Airlines Group, the parent company of U.S. Airways

Maintenance crews corralled the crustaceans -- which had escaped from their cages on the aircraft as they were in transit earlier -- before the flight was able to depart New York for its destination in Charlotte, North Carolina, Freed said.

It's not clear exactly why the crabs were being shipped but it's not unusual for airlines to transport different types of cargo, including live animals, Freed said.

US Airways officials announced to passengers at the airport that the flight was delayed because of crabs, according to Anna Scarcella, who was on the flight.

She tweeted: \"Ladies and gentlemen your flight is delayed b/c a box of live crabs spilled out in the cargo bin during flight\" @USAirways how is this real\"

\"I think everyone appreciates knowing the cause for their delays and I don't know how anyone wouldn't find this funny,\" Scarcella told CNN.

James Gillespie was flying to North Carolina for a wedding. He said he was concerned about arriving too late to make the drive. After learning the delay was minimal, he said he found the entire ordeal \"amusing.\"

\"Because the delay wasn't that long, I hadn't seen much anger,\" Gillespie said of other passengers. \"They (passengers) just couldn't believe the reason.\"

The situation was such, though, that even hard-shelled airline industry veterans could see the humor.

Scarcella said, \"I fly a lot so I expect inconvenience but I appreciated the humor here. I don't think I was alone in that.\"