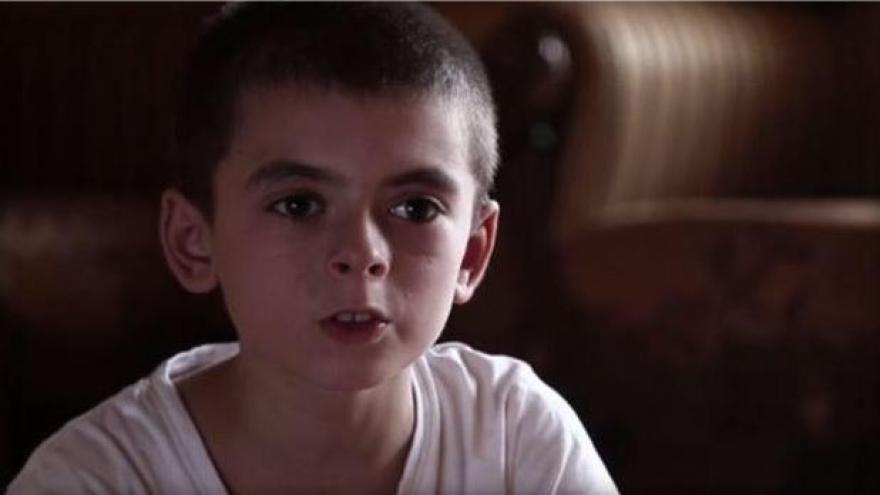 LONDON (CBSNews) -- Facing all-but guaranteed defeat in their last urban stronghold, Islamic State of Iraq and Syria (ISIS) extremists seem to be relying more heavily on the youngest of their recruits to carryout both attacks, and deliver their propaganda.

For the first time, a child of purported U.S. origin has been put in front of ISIS cameras as a mouthpiece for the terror group.

His message, clearly crafted by adults, seems to acknowledge the terror network's weakening grasp on the vast swath of territory it once held across Syria and northern Iraq, warning President Trump by name that the battle, "is not gonna end in Raqqa or Mosul," but rather "in your lands."

The ISIS propaganda video featuring the alleged American ISIS "cub" was released online Wednesday by the terror group's media operation in Raqqa, Syria. It came out one day after the terror group published photos online of a purported suicide bomber in Iraq, who appeared to be in his early teens, if not younger.

CBS News monitors ISIS propaganda channels online, and while the group's use of child soldiers is not new we have noted an increase in the appearance of children in videos and photographs from the battlefields around Raqqa and western Iraq in recent months.

In June, U.S.-backed Kurdish and Arab forces launched an offensive to recapture Raqqa, ISIS' de-facto capital city since the summer of 2014. The battle has grown deadlier by the week, with mounting claims of civilian casualties caused by U.S.-led coalition airstrikes.

Those strikes have enabled the U.S.-backed Syrian Democratic Forces (SDF) to slowly tighten the noose on the remaining ISIS contingent in Raqqa, but militant holdouts -- estimated to be about 2,000 in number -- are entrenched in the center of the city, many with their families.

CBS News cannot confirm the claims made in the ISIS video, including that it was shot in Raqqa and that the boy who appears in it came to Syria with his mother two years ago, when he was eight. He says his father is a member of the U.S. military who fought in Iraq.

Asked about the video on Wednesday, State Department spokeswoman Heather Nauert said the U.S. government could not confirm that the boy is a U.S. Citizen and added that, regardless, the video was "depraved. It's another example of how wrong and evil ISIS is."

With reports of civilian casualties in Raqqa rising fast, United Nations humanitarian adviser on Syria Jan Egeland told reporters in Geneva on Thursday that the various sides fighting in and around the city should "think of possibilities, pauses or otherwise, that might facilitate the escape of civilians, knowing that Islamic State fighters are doing their absolute best to keep them in place."

The U.N. estimates that some 20,000 civilians are still trapped in ISIS-controlled Raqqa, a figure which likely includes the family of some ISIS family members.

In a statement released Thursday afternoon, the SDF announced a curfew would be enforced in Raqqa, at least the portion it controls, from 8 p.m. until Friday morning. The statement warned residents not to leave their homes during during that time and said the measure was meant to give SDF forces an opportunity to "distinguish civilians from ISIS fighters."

As Charlie D'Agata reported in "Children of ISIS," the premier episode of our "CBSN: On Assignment" series, as ISIS loses ground, legions of young victims are being left behind.

Unless they are caught and given help, the fear is that they will pose a long-term threat to the security of the region, and the world at large.

Children have been victimized by ISIS as both bystanders caught up in a brutal war, and more shockingly, as soldiers who were recruited and indoctrinated with the group's deadly ideology, then trained to kill and fight on the battlefield.

The "American" boy in the video released Wednesday shows him training with weapons amid the rubble of heavily damaged buildings, but it also shows him playing around with another youngster he identifies as his best friend, a Yazidi Muslim who says he was swept up by the militants as they "liberated" the border town of Sinjar.

Thousands of teens and children as young as six years old have been caught up in the battlefield, and now many are held in jails across neighboring Iraq, suspected of being ISIS fighters.

Many other former child soldiers have slipped back into their homes in the region undetected, and likely back to Europe and the Americas, too. While thousands of recruits joined ISIS from Europe, a much lower number, in the low hundreds, are thought to have travelled from the United States.

As D'Agata reported in "Children of ISIS," the most insidious of all of ISIS' war tactics may have been implanting its dangerous mentality into the minds of its youngest victims, "to help ensure their deadly ideology lives on for generations, and effectively planting time bombs throughout the region, and the world."