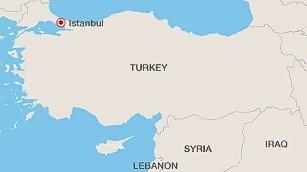 Istanbul (CNN)The suicide bomber who killed at least nine foreigners on Tuesday in a popular central Istanbul tourist area belonged to ISIS, officials said -- an attack that shows the group's nerve, reach and capacity for terror.

President Recep Tayyip Erdogan initially said the attacker had Syrian roots. A short time later, Prime Minister Ahmet Davutoglu went one step further, saying the man responsible for the blast came from outside Turkey and was a member of ISIS, the terror menace that has entrenched itself in neighboring Syria and Iraq while proving willing time and again to lash out worldwide.

"These terrorists (are) targeting the whole of civilization," Davutoglu said.

At least nine German nationals died in the attack, according to a Turkish official who declined to be named. Davutoglu had indicated that, while all the dead came from outside Turkey, the 15 wounded were from inside and outside his country.

Deputy Prime Minister Numan Kurtulmus said the bomber was born in 1988 and came from Syria. No group immediately claimed responsibility for the explosion between between the Hagia Sophia and Blue Mosque tourist attractions in the cultural and historic heart of the city.

For nearly five years, various groups have been engaged in Syria's civil war -- a conflict that, according to the United Nations, has claimed more than 250,000 lives, spurred more than half the country's 17 million residents to leave and caused humanitarian crises for those left behind, as illustrated by the hundreds starving in the siege of Madaya.

This violence can be pinned on many groups, including forces loyal to Syrian President Bashar al-Assad. Yet ISIS has been behind many of the worst atrocities there and elsewhere in the region, a fact that's made the terror group a top target for civilized countries.

A member of NATO, Turkey has increasingly been engaged in this fight -- including allowing theUnited States to launch strikes from Incirlik Air Base in southern Turkey and clamping down to curb more fighters from going through its territory to join the group. ISIS has responded by singling out Turkey as a primary target, and a recent issue of its Dabiq magazine had a cover showing Erdogan alongside U.S. President Barack Obama.

Yet Davutoglu stressed Turkey wouldn't back down, urging his countrymen and people worldwide to unite against this common threat.

"We will continue our fight against terror (with) the same firm attitude," said the Prime Minister, insisting terrorist attacks wouldn't affect Turkey's proud multi-cultural heritage or welcoming nature. "We will never compromise, even one single inch."Tuesday's blast rattled Sultanahmet Square around 10:20 a.m. (3:20 a.m. ET) and brought a rush of ambulances and security forces to an area that would have been heavily guarded on any day.Targeting outsiders would be in line with attacks executed or inspired by ISIS, which has enemies everywhere and has proven willing to strike those who don't subscribe to its hard-line version of Sharia law.

German Chancellor Angela Merkel earlier said "we are very worried" that her county's citizens are among the dead and wounded after a German tourist group was apparently "impacted" by the explosion. Turkey is a popular destination for Germans, and Germany's foreign ministry urged travelers in Istanbul "to avoid public gatherings (and) tourist attractions for now" after the attack.

A Norwegian citizen was taken to a nearby hospital after the incident, foreign ministry spokesman Frode Andersen told CNN.

Sajjan Gohel, international security director at the Asia-Pacific Foundation, doesn't think it's a coincidence this suicide blast happened in a square that's both a draw for tourists and significant to Turkey's history and its diverse cultural identity -- the type of place, he said, "that ISIS is so deeply opposed to."

"The type of monuments that are in Sultanahmet Square are the type that ISIS has been blowing up in Syria," Gohel told CNN. "It's seen as a place where you have a mesh of different entities. It's a real melting pot."The blast comes at a time when Turkey is dealing with multiple security threats -- from longstanding nemesis the Kurdistan Workers' Party, or PKK, as well as ISIS, which has taken over swaths of Syria and Iraq on its quest to form a far-reaching caliphate.

Ankara has persistently battled the PKK, which the United States and other governments have branded a terror group.

Turkey's actions against ISIS, which first emerged out of Iraq but now has its de facto capital in Syria, are more recent but have nonetheless made it a target of that terrorist group.

Its military cooperation with the United States and other NATO nations in particular has angered ISIS,said Fadi Hakura, associate fellow at Chatham House.

Investigators honed in on ISIS after two suicide blasts in October hit a lunchtime peace rally in Ankara, in which demonstrators were calling for an end to the renewed conflict between the PKK and Turkish government. Those explosions killed as many as 100 people and injured more than 240 more.

Tuesday's blast -- if it's confirmed to be the terror group's work -- ups the ante for Ankara, forcing it to step up its anti-ISIS fight even more, according to the Asia-Pacific Foundation's Gohel.

"An attack like this is designed to create economic, political and social consequences," Gohel told CNN. "Turkey has to realize that the pipeline that feeds ISIS from Turkey to Syria has to now be cut off, because incidents like this are not one-offs. This could be part of a series of plots."