"Is this really happening?" -- Waitress gets the surprise of her life 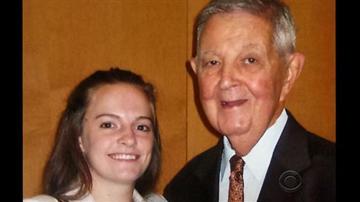 (CBS NEWS)--Melissa Mainer of Harrisburg, Pennsylvania knew she wanted to be a nurse.

What she didn't know was how she'd pay for the classes.

So like the millions of other aspiring \"anythings\" across the country, she decided to take out a hefty loan.

She didn't think she would see an end to paying off her loan.

And that's the hole Mainer was trying to dig herself out of the day her knight in shining walker walked into the restaurant where she worked.

Benjamin Olewine is a regular at the Peachtree restaurant. He knows all the waitresses.

He has made millions over the years and now, at 92, is busy giving away much of it.

His goodwill is plastered everywhere -- from the local park to the hospital lobby.

But a lot of what he does is unseen, which brings us back to the Peachtree.

\"His bill I can remember was three dollars and 45 cents,\" said Mainer.

His tip, on the other hand, was hardly pocket change.

\"I said, 'Melissa, I'd be happy to pay your tuition.' And that's exactly how it happened,\" said Olewine.

Olewine says he had to ask her two or three more times, \"bring in your tuition bill so I can pay the darn thing!\"

She finally did, and now after a few years since then, he has paid every bill.

Today, they still see each other at the restaurant, but Melissa doesn't work here anymore.

Thanks to roughly $20,000 worth of tuition payments, Melissa is now a debt-free, registered nurse.

She works for Pinnacle Health in Harrisburg in, of course, the Benjamin Olewine Spine, Bone, and Joint Institute.

Her next goal is to get her master's.

And guess who has already agreed to pay for that too?

The old philanthropist with the new reputation.