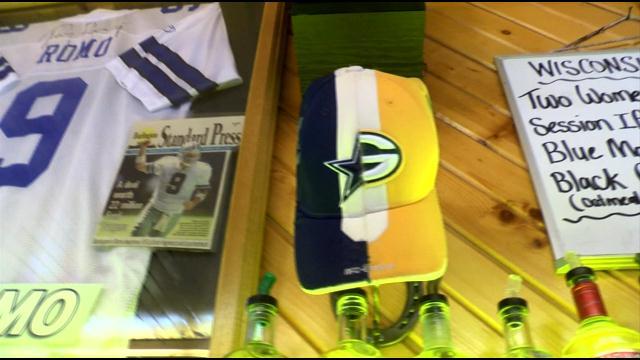 If you take a trip to Burlington, it's hard to tell if you're in “Packers Nation” or “Cowboys Nation”.

If you go to Fred's Burgers located on North Pine Street in Burlington, you will spot a picture or jersey of the Cowboys starting quarterback.

It's fitting seeing that Fred's used to be one of Tony Romo's hangout spots when Romo played football at Burlington High School.

\"I kinda think a lot of people are Packer fans, but when you have someone from your hometown that's an NFL quarterback, that's kind of an exciting thing,” said Fred's Burgers employee Julie Bush. “I think are rooting for Tony, but they want the Packers to win.\"

Customers at Fred's support Romo, but they are rooting for a Packers victory on Sunday.

Customers at a bar down the street on North Pine are rooting for the Packers and the Cowboys.