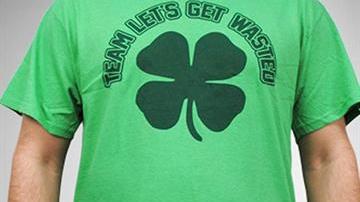 MILWAUKEE-The local chapter of the Ancient Order of Hibernians is joining with its other chapters nationwide in asking Spencer's Gifts to pull certain Irish t-shirts from its shelves and online.

Some of the t-shirts twist the beloved phrase \"Kiss Me I'm Irish to \"F*** Me I'm Irish\" and others feature the slogan \"Team Get Wasted\" over a flour leaf clover.

\"I don't like any four letter word used along with Irish,\" Milwaukee AOH Chapter Vice President Tom Callen tells CBS 58 News. \"I think these t-shirts have the ability to shape perception.\"

The Hibernians are the oldest and largest Irish Catholic organization. Their name is a derived from Hibernia, which is the classical Latin name for Ireland.

Callen and his fellow members say the marketing of these t-shirts feeds into the old stereotypes that faced Irish immigrants when they first came to America and were met with rampant discrimination.

\"We're taking a step backward to the 18th century when Irish immigrants were not viewed as serious people. That stereotype can end. Whether it ends in my lifetime, I don't know,\" the 66 year old continued, \"We need to make a stand and now is our time.\"

The t-shirt image of a four leaf clover is also a distortion of Irish tradition. St. Patrick used the shamrock with three leaves as a symbol of the trinity; the Father, Son and Holy Ghost.

Callen says he's thankful there are several local organizations that choose to bring significant meaning to St Patrick's Day, instead of reducing it to a \"drinking holiday.\"

The Shamrock Club celebrates the patron Saint, who was a priest, with mass at St Patrick's Church at 7th and Washington at 8:30 March 15th, the day of the parade. Readings are in both the English and Irish language.

An authentic Irish breakfast will be served afterwards at the Irish Cultural Heritage Center along Wisconsin near 21st Street to help raise money for the Pilot Club of Milwaukee.

The Shamrock Club of Wisconsin stages a downtown parade Saturday, the 15th at noon.

The AOH hosts a second parade at 3 p.m.on the same day along Blue Mound.

The Friends of St Patrick of Milwaukee with gather food and donations for local shelters.

Both marches are filled with traditional Irish music groups and dancers and emphasize culture.

Callen says of course people will gather in the bars and restaurants along the route but adds, \"It's how a good time is defined and the message of responsible drinking is not getting across.\"

Some AOH chapters, for example in Philadelphia, have gone as far as to stage protests outside Spencer's stores.

At the time, Kevin Mahoney, a spokesperson for Spencer's said the t-shirts are all in good fun. He insisted that there's a market  for them and that Irish people are buying the items and that nobody's out to offend anybody.

But just this week Adidas faced a similar controversy and as reported by Reuters:

\"Adidas agreed on Tuesday to stop selling two raunchy T-shirts months ahead of the World Cup in Brazil after the government complained that they associated the country with sexual tourism.\"

Will that cause Spencer's to have a change of heart? Or perhaps those who Spencer's claims are eager to buy the shirts will reach for something authentic instead.

Callen says he can only hope.

\"Somewhere you have to make a stand.\"