Irish music wafting through the rafters of the Irish Fest Center 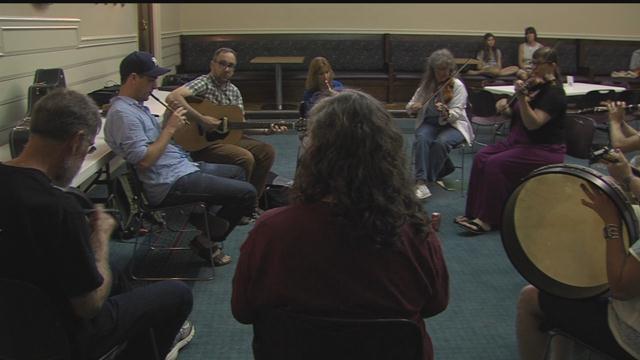 The jam session among teachers and students of the summer school was hosted by the Irish Fest Center, but in the days ahead, similar gatherings are expected to happen locally at various pubs.

The sessions is a way for Irish music enthusiasts to play in a casual setting. Novices can mingle with world class artists who are here for instruction the traditional Celtic Arts.

Usually the musicians chat before playing.

They decide on tunes they'll play together and string them all together. What's called a set of tunes.

If you want change the tune you kick up your leg to let the others know.

\"People who work in the fields or other jobs in Ireland also play music.\" explained Brett Lipshutz of Milwaukee. \"A lot of them were not professional musicians. So, to enjoy themselves, they would hang out in the pub after work or the kitchen and just play music together. So it's important to keep the base of that tradition going.\"

The students and teachers will take their instruction from the Center to \"The Chancery\" restaurant and pub on State Street in Wauwatosa Tuesday night around 9 p.m.

Socks in the Frying Pan from County Clare will be the headliner.

\"I think it's great that people who don't know each other can just come together and play a piece that they all know,\": said Elise Brinich who came up from Glen Ellen, IL for the school. \"They communicate through their music. It's spectacular.\"