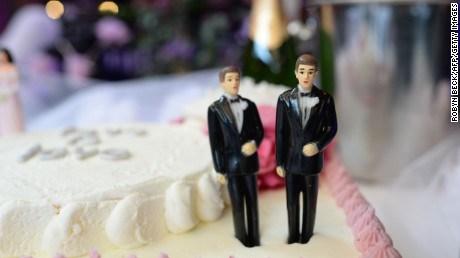 (CNN) Same-sex couples will soon be able to walk down the aisle in the Emerald Isle.

Voters in Ireland overwhelmingly chose to change their nation's constitution Friday, becoming the first country in the world to legalize same-sex marriage through popular vote.

The official results were announced Saturday at a Dublin Castle press conference: 1,201,607 voted in favor of the landmark referendum, while 734,300 voted against it, said Ríona Ní Fhlanghaile, an elections official.

Voter turnout in the majority Catholic nation was more than 60%, according to Fhlanghaile.

Despite speculation in the run-up that opposition to the measure might have been understated because people were too shy to tell pollsters that they planned to vote \"no\" -- the outcome was lopsided, with the measure passing by just over 61% of the total vote cast.

Once the votes began to be tallied, the result was never in doubt.

Only one of the country's 43 parliamentary constituencies failed to pass it.

As is the case in many other countries around the world, the issue is a polarizing one in Ireland, a country that didn't decriminalize homosexuality until the 1990s.

This referendum was seen as a test of whether more liberal thinking can trump Ireland's traditionally conservative, Catholic leanings.

Prime Minister Enda Kenny said prior to the vote that the country could \"create history\" and that a \"yes\" vote would \"obliterate\" prejudice along with irrational fears of difference. On Saturday, Kenny said the outcome \"disclosed who we are -- a generous, compassionate, bold and joyful people.\"

\"In Ireland, we're known as a nation of storytellers,\" added Deputy Prime Minister Joan Burton. \"And today, the people have told quite some story. This is a magical, moving moment.\"

Gerry Adams, leader of the Sinn Fein political party, called it \"a huge day for equality,\" and over the border in Northern Ireland -- the only part of the United Kingdom where same-sex marriage is still prohibited -- Deputy First Minister Martin McGuinness hoped they'll take notice.

\"The world is moving on and Ireland is taking the lead,\" said McGuinness. \"Politicians, particularly in the north need to reflect on this progress.\"

While same-sex \"civil partnerships\" were introduced in Ireland in 2010, advocates for marriage equality said those fell short of the recognition and protections afforded by marriage.

Gay and lesbian couples will now be able to enter into civil marriage, which \"is different and distinct from religious marriage,\" according to Yes Equality, the umbrella group that spearheaded the campaign. \"No religious institution can be forced to marry a lesbian or gay couple against their beliefs,\" the group's website says. \"Churches will be able to continue with religious ceremonies and will not be required to conduct wedding ceremonies for same-sex couples.\"

Opposition was largely organized by Catholic groups that focused on a message of protecting the traditional family.

Yes Equality says however that the outcome will have no bearing on surrogacy or adoption rights.

Despite the pounding they took at the polls, opposition groups struck a conciliatory tone after it was over.

\"Congratulations to the Yes side. Well done. #MarRef,\" tweeted a conservative Catholic think tank that advocated against legalizing same-sex marriage.

\"This is their day, and they should enjoy it,\" said another group opposing same-sex marriage, Mothers and Fathers Matter.

\"Though at times this campaign was unpleasant for people on all sides, nobody who involves themselves in a campaign does so with anything but the good of their country at heart,\" read a group statement. \"There is no better way to resolve difference than the way we are using today.\"