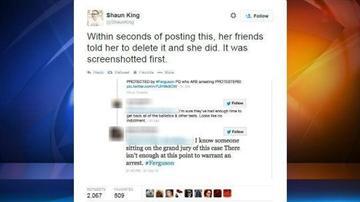 \"The matter has been referred to the prosecuting attorney for investigation,\" said a statement from the St. Louis County court administrator. \"The court will hear the matter and take appropriate action, if the prosecutor finds cause to believe misconduct has occurred.\"

The Washington Post first reported Wednesday that \"an account of possible jury misconduct surfaced ... on Twitter when several users sent messages about one juror who may have discussed evidence in the case with a friend.\"

In one post, someone said they knew a member of the grand jury and \"there isn't enough at this point to warrant an arrest.\"

The developments came on the same day the prosecutor's office said the investigation into the controversial shooting death in the St. Louis suburb has been completed.

Ferguson police Officer Darren Wilson shot and killed the 18-year-old in the middle of the day on August 9 after telling Brown and a friend to get out of a street.

Authorities could have charged Wilson themselves by filing a criminal complaint, but St. Louis County Prosecuting Attorney Robert McCulloch instead opted to present the case to a grand jury to decide whether to indict the officer.

\"The investigation has been basically completed that is being conducted by both the FBI and St. Louis County PD,\" Ed Magee, the spokesman for the prosecutor's office, told CNN.

A grand jury is expected to decide by mid-November whether Wilson will be charged criminally for the shooting, which sparked weeks of unrest on the streets of Ferguson and calls for a federal civil rights investigation. The white police officer's shooting of the black teenager was heavily debated throughout the nation.

The grand jury, which began meeting in August, is expected to consider whether a crime was committed and if \"probable cause\" exist that Wilson committed that crime.

It was uncertain how the misconduct investigation might affect the case. If misconduct is found, the process may have to start over, The Post reported.

Some witnesses have said Brown assaulted the officer at the outset and tried to grab his gun. Others said Wilson was the aggressor.

A private autopsy conducted for the Brown family showed that Brown had been shot at least six times, including twice in the head.

Last month, two contractors doing construction work in Ferguson on the day Brown was killed said the teenager had his hands up in the air as he was gunned down.

The men, who asked not to be identified after CNN contacted them, said they were about 50 feet away from Wilson when he opened fire. A video captured their reactions during the moments just after the shooting.

The men said they didn't see how the confrontation started.

Federal officials are conducting two civil rights investigations -- one into Brown's killing and the other into the Ferguson Police Department's record with minorities.

One investigation will review the shooting by Wilson, a 28-year-old officer with six years of experience, including four in Ferguson. A civil rights violation would require that Wilson had shown \"racial hostility\" against Brown in the shooting, legal analysts have said.

The U.S. Justice Department also announced a second inquiry to examine accusations that the Police Department as a whole practiced racial profiling and heavy-handed tactics.

The shooting ignited angry protests and instances of looting on the streets of Ferguson. Community leaders criticized what they said was an excessive show of force by police to the demonstrations.

Last week, even after apologizing for his department's actions after the shooting, Ferguson Police Chief Thomas Jackson insisted that he's not stepping down.

Jackson said he's heard the calls for his ouster, but that doesn't mean he'll answer them.

\"I've talked to a lot of people who have initially called for that and then changed their mind after having meetings and discussions about moving forward,\" he said. \"Realistically, I'm going to stay here and see this through.\"

An apology, with continued unrest

The Brown shooting stirred complaints of widespread racial profiling in Ferguson, which Jackson has rejected.

\"It's never been the intention of the Ferguson Police Department -- or any police department that I know -- to intentionally target individuals because of race,\" the chief said. \"If there is that happening, it's a crime and it needs to be addressed.\"

Jackson released a video apology to Brown's parents and the peaceful demonstrators who took to Ferguson's streets to protest the young man's death.

In that video, the chief expressed regret that it took investigating officers four hours to remove Brown's body from the street after he was shot dead.

The St. Louis suburb of 21,000 erupted again last week after one of three Brown memorials at the site of the shooting burned.

While many peaceful protesters took to the streets on September 23, violent elements within the demonstration stoked chaos, attacking police with gunfire, rocks and bottles, and vandalizing and looting businesses, Missouri Highway Patrol Capt. Ron Johnson said.

One person threw a Molotov cocktail at a parking structure, and there was an attempt to set a gasoline fire at a custard shop, he said.

Two officers were injured, one of whom was struck by a rock below the eye, Johnson said.

The City Council has recently taken up measures to reform court procedures and the way the city handles certain fines.

The council is also considering a citizen review board to monitor the Police Department.