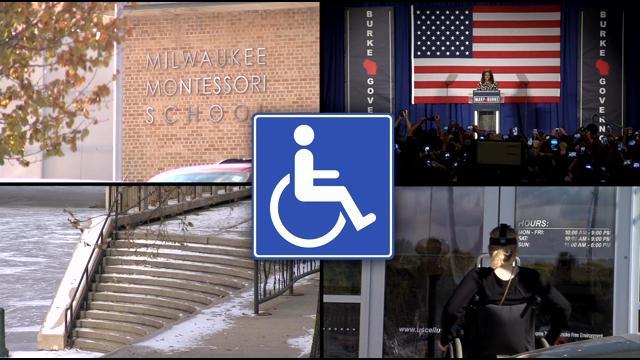 Over the past several months the disabled community reached out to CBS asking whether the Americans with Disabilities Act was violated. We found that the ADA doesn't protect people in every situation.

The first issue brought to our attention was access issues at Bayshore Mall with Julie Withers.

\"I don't know if I'd shop in this mall strictly for access.\"

Independence First, who represents the disabled community, says its office received multiple complaints about the doors being too heavy, so we sent Withers in.

After testing the doors withers came to this conclusion--\"I'd say 75 percent of the doors were too heavy, and 25 percent were easy to open.\"

Independence First says after multiple complaints it tested the doors.

Diana Sullivan, Disability Rights Access Specialists with Independence First says, \"There is a tool that we use to measure the weight that it takes to open the doors, many of the doors at bayshore weigh 20-22 pounds to open.\"

We approached Bayshore, but only got this statement: \"The success of Bayshore Town Center is built on our long-standing commitment to ensuring accessibility to the entire community, including those members with handicaps and disabilities.\"

Managers didn't say how or if they plan to remedy the problem,. And they're not required to under the ADA, exterior door weight is not regulated.

We found other issues. Including an ADA complaint against Milwaukee Montessori School that was sued for un-enrolling a student with a neuromuscular disorder, who required naps. The school didn't make accommodations at the time but has since settled.

The City of Milwaukee's River-walk, costing 11 million dollars had to be redone because it wasn't wheelchair accessible.

And a bus stop at Southridge Mall was moved away from the door, firing up the disabled community. The mall has since agreed to move the bus stops closer to the entrance.

But the ADA isn't always cut and dry. Recently Michele Obama spoke at a Mary Burke rally. But didn't win points with Tony Snell who took his disabled parents to the event.

Snell says, \"Those in wheelchairs, did not have equal access, and they deserve to be on the same level, not pushed to the back of the room.\"

But according to our ADA legal expert, Sara Geenen with Previant Law Firm, there isn't any legal recourse that can be taken.

She says there is only one case addressing political parties--\"It goes the other way. It says a political party is not an entity subject to regulation under the ADA.\"

For people like Julie Withers she simply wants to see her school, malls, and public walkways, as accessible to her, as they are to everyone else.