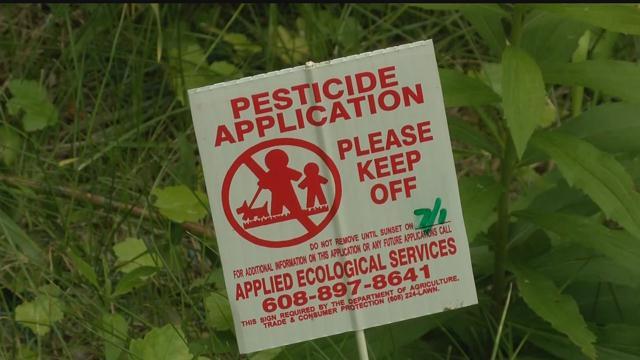 In Sheboygan contractors have started the removal of hundreds of dangerous plants known as 'hogweed'.

Nearby homeowners said they had no idea what hogweed was or what it was capable of which includes sending people to the hospital for rashes and blinding eye irritation.

Ben Castrey, whose grandmother moved into a nearby home about year and a half ago, said he never noticed the plants.

"I hadn't seen 'em before. Or maybe I did and I just didn't notice 'em because they probably were like half the size they are now," Castrey said

"It's just weird that so many of them came here. And my grandma thinks that the person who lived here just liked strange plants and they just planted some here - apparently a lot," Castrey said.

"It's kind of like 'Land of the Lost'. You literally get a sore neck looking up at these things," Scott Horzen, a board member of SEWISC, said.

SEWISC is the Southeastern Wisconsin Invasive Species consortium and they coordinated the response to the hogweed after a neighbor identified the plant.

Contractors treated about 900 stems in the area. The state paid for it out an available rapid response fund, Horzen said.

The group is working quickly because the plant is invasive but there are other reasons why people wouldn't want the plant around, Horzen said.

"The sap on your arms, legs, face. If you get it on your arm and you wipe your brow you can get it in your eyes. Then what happens is over the course of the day is that sap reacts with the sun and causes burns that that look like a really bad sunburn up to a physical fire burn," Horzen said.

The concentrated sap is even more dangerous. That's why the chemical spraying and cutting process takes time, Horzen said.

Ben says he's glad he got a heads up.

"Yeah, cause I've probably seen them a million times and I didn't know what they were," Ben said.

If you believe that you have hogweed in your backyard take a photo and look online to make sure you've correctly identified the plant. Then contact the WI DNR or SEWISC.