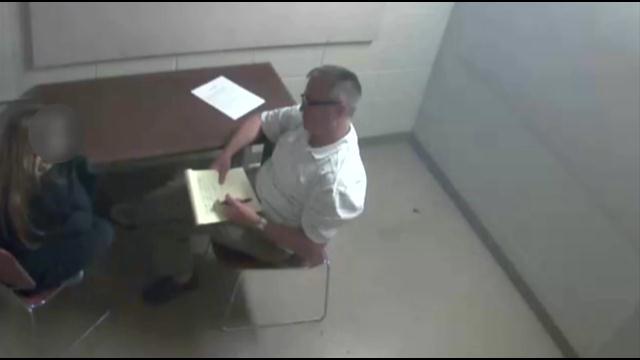 Nine hours of police interrogation of two girls charged with the Slender Man stabbing have been made public.

Morgan Geyser and Anissa Weier are accused of stabbing a classmate 19 times last May to impress the fictional internet boogeyman. All three were twelve years old at the time.

CBS 58 obtained a copy of the interrogations. Just hours after the stabbing, the girls had to explain to police what \"Slender Man\" was.

It soon became apparent to police that the two girls were very versed in Slender Man legend. Geyser told police \"Oh, I've seen him in my dreams...you start to be affected by something called 'slender sickness' because of the sigma radiation.\"

Both girls told police that killing their friend was the other girl's idea.

Police- so did you guys talk about doing this beforehand?

Geyser - Anissa told me we had to

Geyser - Because, she said that he'd kill our families

But Weier told a detective that \"Morgan said, 'Hey Anissa, we should be proxies...' I said 'ok, how would we do that?' and she said, 'we have to kill (the victim).'

Weier cried through most of her interrogation. She told police that it was Geyser who jumped on their friend and started stabbing her repeatedly. \"The whole time, (the victim) was screaming in agony,\" Weier said, saying stuff like, 'I hate you guys, I'll never forgive you, I trusted you.'\"

Morgan Geyser did not appear emotional during her nearly six-hour interrogation, singing to herself when the detective left the room briefly.

The detective asked her Geyser if she had any regrets. \"Does it make you feel bad, that you stabbed one of your best friends?\" he said. Geyser replied, \"I thought about it, but decided that remorse would get me nowhere.\"

If convicted, both girls face up to 65-years in prison. Their attorneys want their cases moved to juvenile court, a judge is expected to decide on that by March 13.