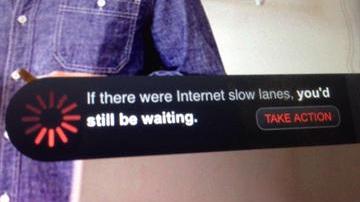 MILWAUKEE -- Your internet might look slow today, but it's really not.   You might run into loading symbols on your favorite websites today.  They really won't be loading - but it's a protest the sites want you to support.

Sites like Netflix and Reddit will lead the way for internet slowdown day.  It focuses on net neutrality - something many people aren't aware of.  It means everything on the internet should be treated equally.  Meaning there shouldn't be extra charges for access to certain sites, apps, or content.   The FCC  supports so-called internet fast lanes.  This would allow broadband companies to charge companies like Amazon or Netflix more money for prioritized access to consumers.  This would severely limit small companies and tip the scales towards big providers.  FCC chairman Tom Wheeler introduced the fast lane ideas earlier this year.  He was met with opposition at the time.

\"I've consistently said that there is only one internet. There's not a fast internet and a slow internet,\" Wheeler said.

\"The internet has indeed flourished under the current light-touch regulatory scheme,\" U.S. Rep. Fred Upton of Michigan said. \"Subjecting it to burdensome regs is a leap in the wrong direction.\"

The proposal is now open for public comment and could be changed before a final vote to implement it.