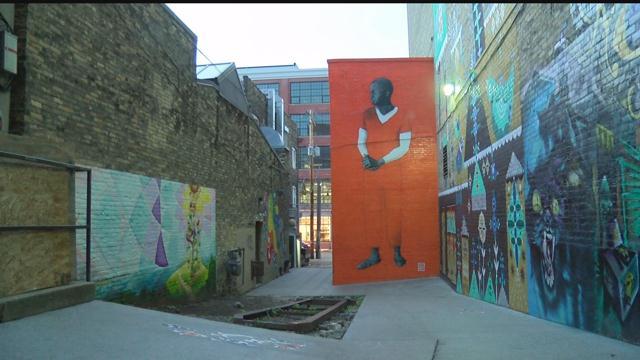 Andre Hudson sees himself in a new mural that's generating controversy and has his own unique view of it.

CBS 58 showed Hudson a picture of the mural, which depicts a black man in an orange prison jumpsuit, during a visit to the House of Correction in Franklin. The 38-year-old said he's been incarcerated on and off for 16 years.

"I made mistakes my whole life, always blaming society for certain things," Hudson said. "Now it's a different outlook on life for me."

The artwork is part of a larger project called Black Cat Alley, an outdoor arts destination on Milwaukee's east side.

Dennis Walton compares the emotional controversy to what's going on with Colin Kapernick.

He said emotions may be strong, but the focus should be on finding solutions.

Walton works with men who are incarcerated through the Milwaukee Fatherhood Initiative. A 13-week workshop at the House of Correction helps inmates become better fathers.

"We know that if you're a stronger father or a better father you're going to create a stronger community," said Walton.

Hudson is one 25 inmates who graduated Wednesday from the nurturing father's program and is ready to use the tools he's learned with his four children.

"I get out right before Christmas," Hudson said.

Hudson said he plans to stay out of the system and wants to work with youth. It's a start Walton said will end the cycle, so one day mass incarceration of Milwaukee's black men will no longer be a reality.

"It really hits home for those who are suffering from this issue," Walton said.

So far, Walton said 150 inmates have graduated from the nurturing father's program. You can learn more about mural and the Black Cat Alley project here.