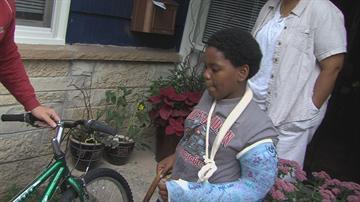 MILWAUKEE -- Like a kid waking up on Christmas morning, 12-year-old Dennis Taylor got quite the surprise Friday - the choice between two bikes to replace the one destroyed in a hit-and-run crash that could have killed him.

\"I didn't expect this,\" Taylor said.  \"I'm excited someone took the initiative... Some people in the world won't even think twice about this stuff.\"

Dennis was riding near his home last week when a stolen Jeep Cherokee hit him from behind.  The men inside the car ran off, leaving Dennis behind with a broken arm, pelvis and a concussion.

\"Whatever God's plan is for them to get caught, or whatever,  I'm praying they do get caught, but whatever his plan is goes,\" Taylor said.

Dennis came home from the hospital with a positive attitude, knowing his bones would heal, but without a bike to ride.

\"These are the types of days at work where you don't feel like you're working,\" Wisconsin Bike Federation's Jake Newborn said.

Newborn saw Dennis' story online and, having been hit by a car himself, wanted to help.

\"I don't think a lot of people would have that positive attitude and be so forgiving of the person who hit him,\" Newborn said.  \"That made me want to go the extra mile.\"

Newborn and his team delivered the bike, helmet, bike lock and flashing lights to Dennis' home.

While Dennis waits until the day he can ride again, the 12-year-old is petitioning for speed humps and four-way stops in his neighborhood.

\"Getting upset isn't going to do anything but make this matter worse,\" Taylor said.  \"You're still alive.  Be happy about that.\"

Dennis and his grandmother have collected about 50 signatures on their petition so far.  They plan to send the petition to Alderman Ashanti Hamilton.  The alderman told the family he will make the safety changes a top priority.

For more info on how you can help with Dennis' petition, visit his grandmother's Facebook page here.

For more info on the Wisconsin Bike Fed, visit their website here