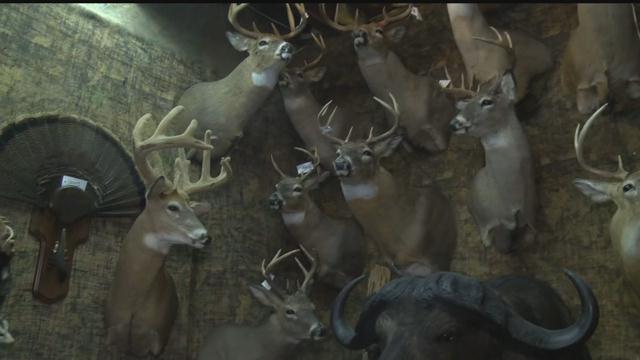 Saturday is the start of gun deer season in Wisconsin and the question remains how the current warm streak is going to affect the harvest.

With unseasonably warm weather Wednesday and the possibility of record high temperatures on Thursday, the current situation does not look good. Deer hunker down when it gets that hot.

But hunters in Burlington remain optimistic looking at Saturday forecast for cold weather.

At Artisan Taxidermy owner Joel Chic already has plenty of work to move through. He's mounting 30 heads and has another hundred heads for European mounting.

But Chic describe the bow season this way.

"It's been hit or miss with the whitetail but this weekend's supposed to be cold so I'm anticipating the deer gun season is going to be boomer," Chic said.

Marty Johnson, wildlife biologist in Racine and Kenosha Counties for the Wisconsin DNR, tends to agree with that assessment.

"What we've seen is reports from the public that people are seeing more deer out there. The mild winter has obviously helped the deer," Johnson said.

Johnson is also trying to get hunters to donate their deer heads to test for chronic wasting disease. Last year there was a drop in the number of samples they received.

"For example, locally, we have stations in Burlington and Waterford where hunters can drop off heads or have lymph nodes removed by technicians," Johnson said.

Joel Chic is one of those technicians. He says people should tell their meat processors about the program. The main problem he encounters is that necks are cut too short.

"Yeah, if they knew how to do it I think they would leave it for us. But I just don't think they know what they're doing. or they don't want to waste their meat," Chic said.

"We would have had more [heads]. I mean, we've had guys coming in here that we've had to turn away every few days anyways and it's kind of unfortunate that they're willing to do so but they couldn't," Chic said about the short neck cuts.