In their own words: Villanova, UNC describe the epic final seconds 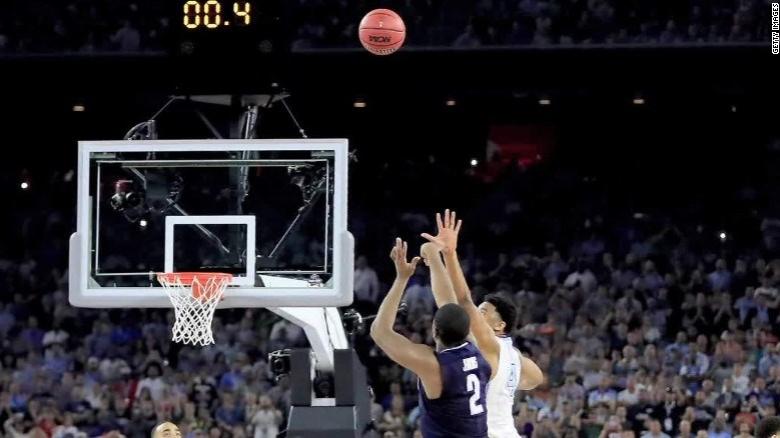 Houston (CNN) This is a five-second stretch that will be replayed from years to come.

With a buzzer-beating three-point shot by junior forward Kris Jenkins, No. 2 seed Villanova won the NCAA men's basketball championship over No. 1 seed North Carolina on Monday night. It's the first buzzer beater on a three-pointer in national championship history.

Both teams recount how the final seconds unfolded.

After Villanova junior guard Josh Hart hit two free throws to make it 74-71, UNC inbounded the ball with 13 seconds to go. While off balance, UNC senior guard Marcus Paige hit an acrobatic three-point shot with 4.7 seconds remaining. It had given UNC life, tying it at 74. Seat cushions flew all over the stadium in celebration.

UNC head coach Roy Williams: "We ran (isolation) for (Paige) the last one. We did have another option, but he was the best option. I wanted the ball in his hands."

Paige: "We ran a screen for me to hit the ball. I had a feeling Villanova would switch it. They did. Took it away. Daniel (Ochefu) fell down, slipped on the court. I knew I was going to have to shoot it.

"My instinct kicked in right away to throw the ball to Brice (Johnson) right under the basket. That's why I hesitated with the ball when I jumped. Obviously we needed three.

"You know, I just wanted to have the ball in my hands in that situation."I told my team when I made the shot, we go to overtime, we got 4.7 seconds to play defense and this game is ours. No matter what, we were going to win in overtime because that's just how the game was going to go."

Williams: "I don't know that I've ever had anybody make a tougher shot than Marcus Paige made."

UNC sophomore guard Joel Berry II: "That's what Marcus is capable of doing. He's been doing that his whole career here. He's just that tough of a guy. You might look at him and think he doesn't look as tough, but he's a tough player. He's a great player.

"He stepped up. That's what we needed. Especially, you know, with him being a senior, that was his last game. He did a great job, man."

Paige: "We knew we could fight back, and we did."

Williams: "He turned a broken play into a great play."4.7 seconds left

Villanova takes a timeout and draws up a final play.

Villanova head coach Jay Wright: "We have an end-of-the-game situation play. We put it in (Ryan) Arcidiacono's hands. It's his job to make the decision. Kris told him he was going to be open."

Arcidiacono: "(It's) something we work on every day at practice."

Winners and losers from the NCAA tournament

But the celebration by UNC fans was premature. Arcidiacono, a senior guard, found Jenkins, who hit the game-winning shot as the horn sounded.

Jenkins: "I knew when I gave Arch the ball, he was going to be aggressive. They were going to try to take Arch away because he's hit big shots in his career."

Williams: "We got what we wanted. (The Wildcats) threw it right in front of them. They had to go the length of the court."Jenkins: "I inbounded the ball to Ryan. I was able to sprint up the court to get in position. And I yelled, 'Ryan! Ryan!'"

Arcidiacono: "All I heard was 'Arch, Arch, Arch.'"

Jenkins: "I was able to get in his vision. I was open, so I was screaming at him."

Wright: "Arcidiacono made the perfect pass and Kris Jenkins lives for that moment."

Paige: "Kris is their best three-point shooter. He got a pretty clean look for whatever reason."

Arcidiacono: "Every kid dreams about that shot. I wanted that shot, but I had confidence in my teammates. Kris was able to knock down that shot."Jenkins: "I think every shot is going in. So, that one was no different."

Wright: "I was just shocked. They did it. Ryan Arcidiacono made a great look. Kris Jenkins has been incredible all year."

Paige: "You know, there's 75 possessions in the game. They just happened to get the last one and make the shot."

Williams: "We made (Arcidiacono) give it up, but we didn't get Kris picked up and he made a heck of a shot."Berry: "Just that feeling of walking off the court, feeling the confetti fall, but it's not for you. It's a horrible feeling."