In route to their wedding, Ga. couple crashes 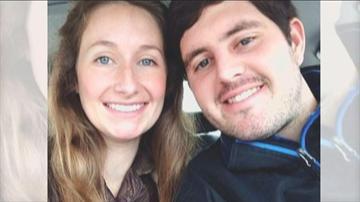 MERIWETHER COUNTY, Ga. - A young couple driving south for their weekend wedding crashed violently on southbound Interstate 85, killing one of them.

The car careened off the interstate in Meriwether County on Monday night as rain poured and severe weather moved across Georgia, reports CBS46 in Atlanta.

John Redman, 23, was driving the four-door Lexus, and his fiancee, 25-year-old Brittany Huber, was the passenger.

Georgia State Patrol said Redman lost control of the Lexus, which crashed into the grassy median between the south and northbound lanes. The car then slammed the passenger side into a concrete bridge abutment.

Redman was unconscious with serious injuries when he was rushed to Grady Hospital in Atlanta. Huber was killed instantly.

The statement said in part, \"Our thoughts and prayers are with her (Brittany's) family at this impossibly hard time. She was an amazing person loved by all who met and knew her.\"

Redman suffered severe injuries including \"... head trauma. John also suffered broken ribs and other fractures, but he is able to move his extremities.\"

\"Please keep the Redman and Huber families in your prayers.\"

Despite the severe weather that moved across the state at the time of the crash, Georgia State Police said weather was not to blame.