MILWAUKEE (CBS 58) -- Heavy rainfall over the weekend has damaged a newly painted, 'Black Lives Matter' street mural. The work of art in the heart of the Harambee neighborhood is no more.

“In disarray, and the thing is that’s all gonna keep coming up and now we gotta get that up to do it over,” said an onlooker.

The street mural painted just a few days ago is practically unrecognizable. Hundreds of people from the community came together at the intersection of MLK Drive and Locust Street to help create it on Friday.

It was commissioned by the City of Milwaukee. “Many of the marches have started on King Drive, and though we’ve seen some buildings be disturbed and that kind of thing, we wanted to use art as a healing tool to demonstrate something beautiful,” Alderwoman Milele Coggs previously said.

However, rainfall over the weekend and continuing storms Monday left the Black Lives Matter mural damaged. It’s coming up off the ground and peeling, fading away its significant meaning.

Car after car driving over the mural is adding to its destruction. “People is riding around, everyday...so quite natural, it’s not gonna last,” said a pedestrian who mentioned he’d like to see the mural repainted.

CBS 58 reached out to the lead artist Vedale Hill, but have not yet heard back.

A local home improvement business has offered to help repair the mural for free. 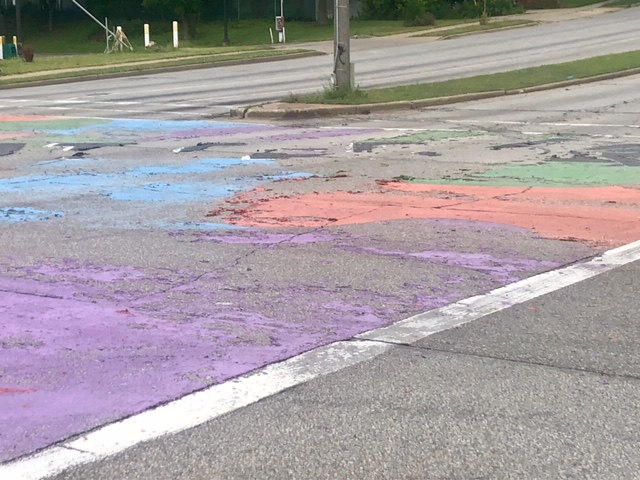 Rayshard Brooks' funeral will be held at the church where Martin Luther King Jr. once preached