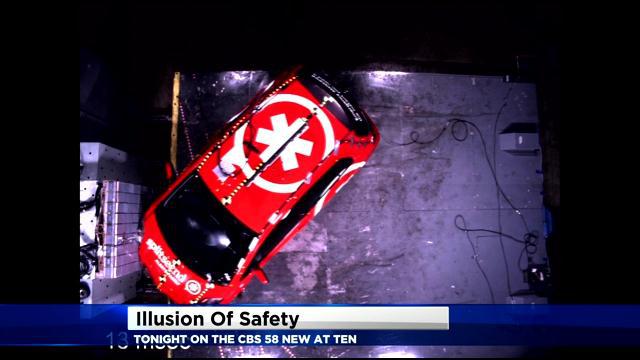 Today's cars are safer than ever, but according to research being done in Milwaukee, automakers may still have a ways to go.

Dr. Frank Pintar and the Medical College of Wisconsin are in the early stages of a theory that could save lives.

Dr. Pintar says automakers have designed cars that are great at protecting people in a head-on crash or a side-impact crash \"because they have to design to those areas, that what the current safety standards are,\" but Pintar wonders \"how do those injuries occur when a car is rated safe?\" and suggests car designers could make their product even safer.

The team at MCW is researching the idea that even the safest cars don't protect passengers very well on what are called oblique crashes, or crashes where the impact comes at a 45-degree angle.

Pintar says these oblique crashes happen often in intersections, but they are hard to track \"largely because they (the government) record crashes as a frontal impact or a side, and these are somewhere in between.\"

To test their theory, MCW put hundreds of thousands of dollars of diagnostic equipment inside the compact car, then set the car on a platform at a 45-degree angle, then had the platform travel at 30-miles-per-hour into a wall.

Three crash-test dummies were inside: a baby in a car seat, an adult woman in the back seat, and an adult male driver.

Based on the test results, the woman in the back seat would have suffered a head injury \"part of the sensors that really stood out to me was a little higher head injury value,\" Dr. Pintar said.

The baby in the car seat? Possible neck injuries. \"The flailing of the child put some stress on the child's neck,\" Dr. Pintar said.

Doctor Pintar says that the injuries to the woman and the baby have a low probability of being life threatening, not so for the man in the driver's seat.

\"He\" slipped out of the shoulder portion of his belt and slammed into the center console. \"The slipping out of the belt actually caused more compression on the lower chest area,\" Pintar said, which could cause a potentially deadly injury \"liver rupture, internal bleeding.\"

What would have prevented a deadly injury to the driver? Doctor Pintar says maybe something simple \"could that driver/occupant had some protection from that side passenger airbag? Perhaps, and that's something to evaluate.\"

More research could lead to a car that protects you better from all angles. Could we someday see a front, side, and oblique standard crash rating in cars? Dr. Pintar says automakers have been cool to the idea of a new standard, but safety sells. \"Our job is to alert the government and the auto industry, 'hey let's not forget about these other areas where people are getting hurt.'\"

MCW partnered with the company splitsecnd to perform this test.