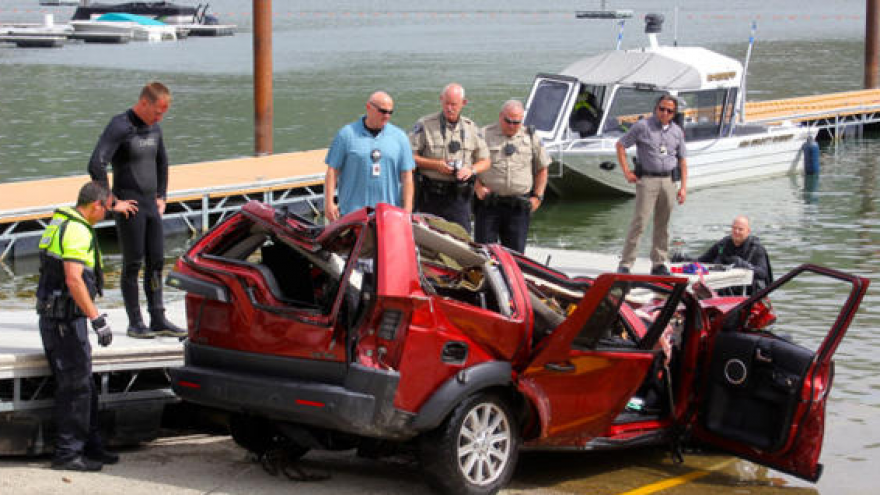 BOISE, Idaho (CBS) -- An Idaho woman who drove her sport utility vehicle off a cliff and into a reservoir in a crash last year that killed her and her three young children did so deliberately, officials said.

The June 2, 2016, deaths were ruled a triple homicide-suicide by the Ada County Coroner's Office, the office said in a statement on Friday.

Officials said 40-year-old Noel Bankhead drove a Land Rover off a 50-foot cliff with her two daughters and son inside. The vehicle sank in 40 feet of water in Lucky Peak Lake.

The bodies of Bankhead and 13-year-old Anika Voermans, 11-year-old Logan Voermans and 8-year-old Gwyneth Voermans were recovered and the vehicle, with a crushed roof, was pulled from the reservoir.

It took the dive team and first responders several hours to recover the SUV, CBS affiliate KBOI reported at the time.

The cause of death for all four was drowning associated with blunt force trauma.

Authorities said that witnesses told investigators that Bankhead was driving on a state highway when she turned off and positioned the car toward the cliff, then suddenly accelerated.

Officials said they found nothing mechanically wrong with the vehicle but were unable to recover information from a water-damaged device on the vehicle that records speed, acceleration and breaking.

Bankhead went through a divorce about two years before the crash. Her obituary described her as an avid runner and full-time working mom who had worked as a paralegal and legal secretary for more than 20 years.

Obituaries described her children as active and curious with various interests and hobbies.