I-94 in Kenosha County re-opens after semi rollover 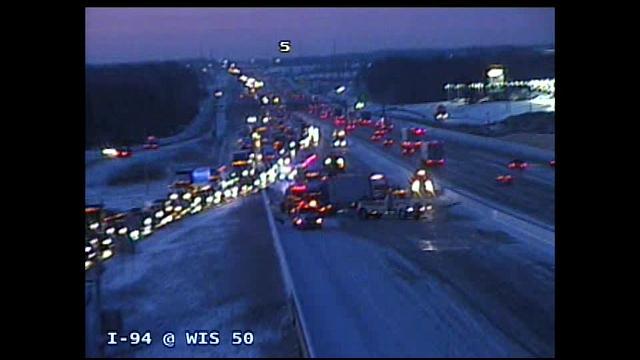 All westbound lanes of I-94 at Highway 50 in Kenosha County have re-opened following a semi rollover that shut down the highway for nearly eight hours.

The weather-related crash happened just before 1:30 a.m. Tuesday on I-94 westbound at Highway 50, when a 53-foot trailer hit the median wall and rolled over. The trailer was carrying 42,000 pounds of Ferro Phosphorus, an additive in steel making, according to the Kenosha County Sheriff's Department.

Delays picked up as the morning traffic commute began and drivers were diverted off the highway. Crews cleared the scene around 9:30 a.m.

Authorities said the solid material inside large bags was not hazardous and nothing spilled. But, the load had to be removed and loaded onto another semi before the trailer could be placed upright and towed.

CBS 58 caught up with the tow truck crew late Tuesday morning as they finished pulling the semi to its location. The impact of the crash was so forceful, the semi lost the back axle and the cab was twisted from the trailer.

Thankfully, no one was hurt.

\"One thing we really take seriously is when we know a snow storm is coming, is we will bring in extra people on it,\" said Kenosha County Sheriff David Beth. \"It does cut into our overtime for the year and we just started it, but it is something we're pretty dedicated to, to make sure that we keep drivers driving through Kenosha county safe as possible.

At last check Tuesday morning, the sheriff's department said it had it responded to at least 27 accidents so far.

The Kenosha County Highway Commissioner Gary Sipsma tells us it was difficult for his crews to clear roads because it was too cold for the salt treatment to work. With the sun out and temperatures rising, he said driving conditions are improving.

He now warns drivers to be aware of drifting snow the next couple of days, as winds are expected to pick up. Sipsma said the department plans to have continuousus operation to handle the winter weather.