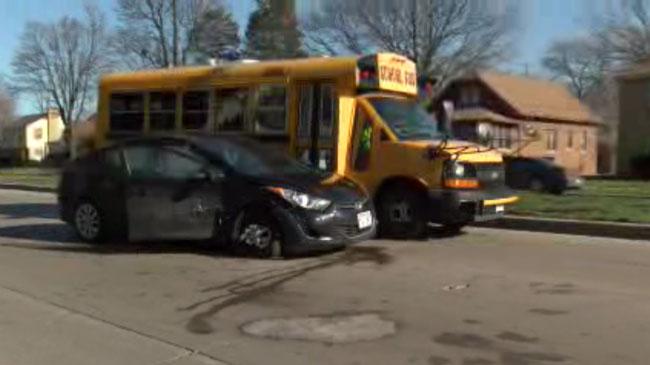 UPDATE: Milwaukee Police are investigating a personal injury crash that happened at N. 47th Street and W. Capitol Drive on Tuesday, April 12th, around 4:00 p.m.  A school bus and a Saab 9-3 were traveling west on W. Capitol Drive.

As they approached N. 47th Street a Hyundai Elantra, traveling north through the intersection, collided with both the Saab and the school bus.  No children on the bus were injured nor were they transported to the hospital.  Two occupants of the Saab and one occupant of the Hyundai  were taken local hospitals for treatment of non-life threatening injuries.  The investigation is ongoing and the driver of the Hyundai will receive a citation for failing to yield the right of way.

ORIGINAL: There was a large police presence near 47th and Capitol in Milwaukee on Tuesday afternoon.

This appears to be a crash involving a school bus. It appears on the scene two cars struck each other pushing the school bus.

There were seventeen children on board the bus.

CBS 58 is at the scene gathering information and will bring you more as it becomes available.