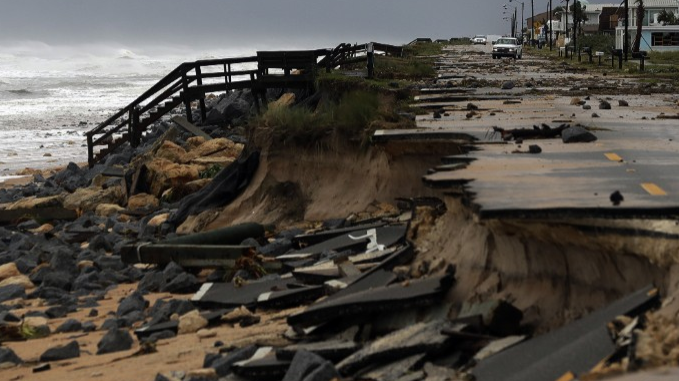 (CNN)A weakening Hurricane Matthew lashed South Carolina's shores Saturday morning, as the Category 1 storm pushed -- or was poised to push -- dangerous amounts of seawater and rain along the coast of that state as well as Georgia and North Carolina.

Matthew, a storm that left destruction and killed hundreds in the Caribbean and at least four people in Florida, continued its trek up the southeastern US coast with 75 mph winds at the center around 9 a.m. ET -- 30 mph slower than just hours earlier.

Flooding is a big concern from coastal Georgia through the eastern Carolinas. Storm surges could be life-threatening in areas, potentially reaching 6 to 9 feet from south of Savannah, Georgia, up through Edisto Beach, South Carolina, according to the National Hurricane Center.

A forecast track for Hurricane Matthew, with the storm's eye predicted to be somewhere within the shaded cone on the days indicated.

Up to 15 inches of rain are possible near and east of Interstate 95 in South Carolina and North Carolina -- and that would be "a flash-flood event on (even) a normal day," Myers said.

• The storm has killed hundreds in the Caribbean, almost entirely in Haiti. At least 300 people died in Haiti, according to Paul Altidor, Haitian ambassador to the United States. Others report much higher deaths. A count by Reuters, based on information from local civil protection officials, puts the death toll in Haiti well over 800. Four deaths were reported in the Dominican Republic and one in St. Vincent and the Grenadines.

• At least four people died as a result of the storm in Florida, officials said.

• As of 9 a.m. ET, Matthew's center was still offshore, even though the outer eyewall had been hitting land during the morning. The center was about 30 southeast of Charleston, and 85 miles south-southwest of Myrtle Beach, South Carolina, the Hurricane Center said. Hurricane-force winds extended outward up to 45 miles from that center. The storm was moving northeast at 12 mph as a Category 1 hurricane.

• More than 1.3 million customers were reported without power Saturday morning in Florida, Georgia and South Carolina.

Flooding plagued near-coastal communities in Georgia and South Carolina on Saturday morning. Flash flood warnings were issued in several locations across the states, including near the state line and the Summerville area near Charleston.

South Carolina Gov. Nikki Haley warned residents who didn't evacuate to go to a shelter. A major storm surge of 8 feet or more is approaching low-lying areas in the state, including Charleston.

Although 310,000 people have evacuated the area, Haley said that's not enough. Officials in some areas are going door-to-door, urging people to leave. Police in Pawleys Island asked residents who decided to stay in spite of the evacuation orders to sign a waiver and list their next of kin, according to CNN affiliate WBTW.

In Georgia, more than 241,000 Georgia Power customers were reported without electricity.

Glynn County officials wrote on Facebook that "conditions have deteriorated to a point that persons remaining in (the area near Brunswick) are advised to shelter in place for the remainder of the storm."

In Savannah, Mayor Eddie DeLoach warned those who stayed that they'd be on their own.

Impact Your World: How to help

"The immediate concern is life-threatening rain and water (from storm surge)," he said.

Matthew battered the coast of east-central and northeastern Florida on Saturday, leaving four people dead and swaths of damage.

The dead included a woman in her 60s in Volusia County who was killed by a falling tree and an 82-year-old man and a woman in St. Lucie County, officials said. The latter two had medical emergencies and responders were unable to reach them in time because of hazardous weather.

A woman in northeast Florida died after a tree fell on her camper trailer, the Putnam County Sheriff's Office said.

Matthew left more than 1 million people without power in Florida alone. Water from the storm rushed through streets, making roadways look more like rivers, in parts of Jacksonville, Merritt Island, Fleming Island and other Florida communities.

Florida struggled with the rising water, rain and strong winds as meteorologists said the storm surge had been measured at more than 4 feet in some areas.

Jacksonville was not battered as heavily as initially feared. But several communities nearby received extensive damage with water surging down some streets, and massive trees toppled over. The Jacksonville Beach Pier washed away Friday morning, according to CNN affiliate WFOX/WJAX.

There was concern over Jacksonville's St. Johns River, which could be overwhelmed by water pushed into it by the storm. The hurricane center said a tide gauge reported storm surge of 4.28 feet.