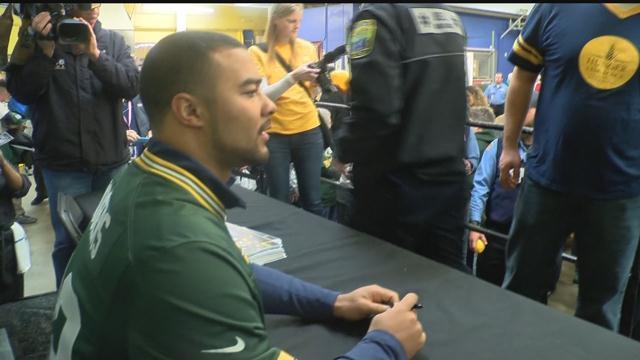 Aaron Rodgers' Hail Mary pass to win the game against the Detroit Lions will mean extra cash for Hunger Task Force and local families in need.

The player who made that game winning touchdown possible was the one on hand to present the check to Hunger Task Force.

This morning tight end Richard Rodgers and Sargento presented a check for $39,000.

Each year Sargento donates $1000 for every touchdown throughout the packer season to the hunger task force.

This year there was 37 touchdowns including Rogers Hail Mary play earlier this month.

Sargento said they feel that play is worth more than $1000 so they donated an extra 2000. Although they admit the play is priceless.

It's money the hunger task force says will go a long way.

"We understand for the 13th season that this is a very important tradition to keep going. And we're just all happy and to be able to help you guys out," said Richard Rodgers.

"Sometimes you have shortfalls like infant formula or breakfast cereal sometimes it's milk. And then we buy full truckloads of food and Sargento's money is used to buy food to help with the families," said Sherrie Tussler, Hunger Task Force’s Executive.

After the ceremony Rogers signed autographs and answered questions.

Many of them still talking about that Hail Mary play.