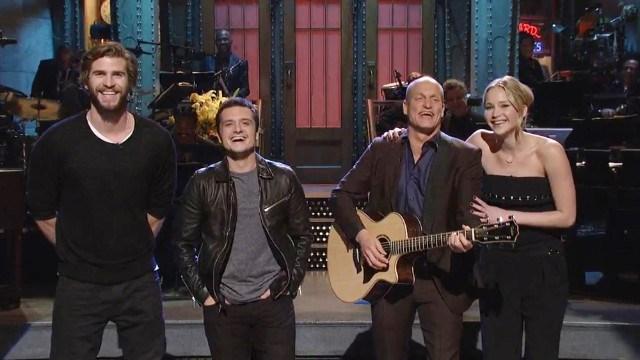 Taylor Swift really is everywhere these days, even inside Woody Harrelson's head.

Harrelson used his \"Saturday Night Live\" opening monologue to riff Swift's hit \"Blank Space\" from her best-selling \"1989\" album to catalog his hazy recollection of that year. Back in 1989, Harrelson was starring on the hit television series \"Cheers\" and hosting SNL for the first time.

Did Swift really appear during Saturday's live broadcast to help him sing?

When a young, attractive woman stepped onto the stage with him, Harrelson played along like Swift had shown up.

When Harrelson asked them for help singing the lyrics, Lawrence declined at first.

\"I don't really think anyone wants to hear me sing,\" said Lawrence, aka Katniss from \"Hunger Games.\"

When the audience applauded, she said she really wasn't trying to get their support to sing.

\"When I sing, I sound like a deer that has been caught in a fence,\" she said.

\"I'd say it's more like a dog being hit by a truck,\" responded Hemsworth, who stars as Gale in the hit movie series.

\"Or that goat that screams like a human,\" added Hutcherson, who stars as Peeta.

It's just a week before \"Hunger Games: Mockingjay - Part 1\" opens, so fans can expect more \"surprise\" appearances from the stars of the blockbuster franchise.