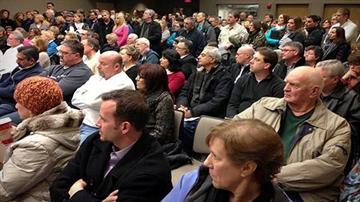 MENOMONEE FALLS - Hundreds of people turned out at Monday night's Village Board meeting to express concerns about a proposed waste treatment plant on Lilly Road. Chemworks, a division of Advanced Waste Services has a plant on Milwaukee's west side. For years, residents in that neighborhood have complained about strong odors coming from the plant that make them feel ill. Chemworks has already purchased the property on Lilly Road, and is waiting for the Village Planning Commission to give the final say on whether it can operate. A petition drive that began on Friday in Menomonee Falls against the proposed Chemworks plant had already gotten over one thousand signatures as of Monday night. In it's application to the Village Chemworks said it is confident that no odors will be released from the plant. The company believes it's being unfairly portrayed and plans to hold meeting to help build trust with the community. The first meetings will be held on January 30th at the Davians Conference Center.