Hundreds turn out for public hearing about waste water company 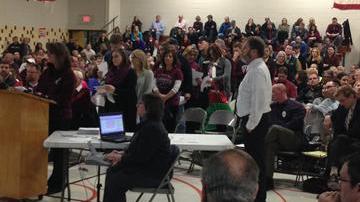 MENOMONEE FALLS, WI - Strong opposition against a company that plans to move into the Village.  Hundreds turned out Monday Night at an elementary school for a public hearing about Chemworks an industrial waste water and disposal company. Chemworks is a division of Advanced Waste Services and plans to operate in Menomonee Falls on a property on Lilly Road that it has purchased. Chemworks is currently operating on Milwaukee's west side, but for years neighbors have complained about odors coming from the company.  Some say the odors are so strong they make them feel ill. Chemworks officials say they're confident no odors will escape the Menomonee Falls facility. The Menomonee Falls Planning Commission will have the ultimate say on whether Chemworks can operate at the Lilly Road location. A decision is expected on April 9th. If it goes against the company, Chemworks officials say they will sue the Village.