MILWAUKEE (CBS 58) -- The community is saying goodbye to Milwaukee Police Officer Matthew Rittner, on what would have been his 36th birthday.

There was a public visitation Wednesday morning followed by a funeral service.

Several people spoke about Officer Rittner's dedication to his work and family. A fellow officer was one of the speakers at Wednesday's service at the Oak Creek Assembly of God Church. Milwaukee Police Chief Alfonso Morales also delivered an emotional eulogy, saluting his officer for the life choice he made to serve and protect others.

"Nobody forces us to be cops. We volunteer to do this job because we believe we make a difference. We believe that we are a part of a greater good. We do this because it's the right thing to do, not the easy thing to do," said Milwaukee Police Chief Morales.

After the funeral service, hundreds of people, many of them law enforcement officers, gathered outside the church for a ceremony that included a rifle salute and a flyover by a Flight for Life helicopter. Then came a procession from the church to the final stop, a funeral home in Brookfield.

Officer Rittner died last Wednesday, February 6 while serving a search warrant. He is the third Milwaukee police officer to die in the line of duty in the past eight months.

All day, strangers have been coming out to say thank you and goodbye to Officer Rittner.

"I'm here for the people that can't be."

"I'm here for the family, Officer Rittner himself, all MPD, and all officers everywhere," said Nelson.

Nelson didn't know Officer Rittner personally but like many others, wanted to come out and show his support.

"They put their life on the line every day, day in and day out and thank you. It takes a special human being to put that uniform on," Nelson said.

Police from all over the state drove here to give Officer Rittner a hero's sendoff.

Richard Page, a Vietnam veteran paid his respects to Rittner who was also a Marine Corps. veteran who served two tours in Iraq.

"It's very impressive that all these people showed up," Page said. "He's a brother."

On Wednesday, many people came out to the growing memorial at 47th and Vliet and have a message for MPD and Officer Rittner's family. 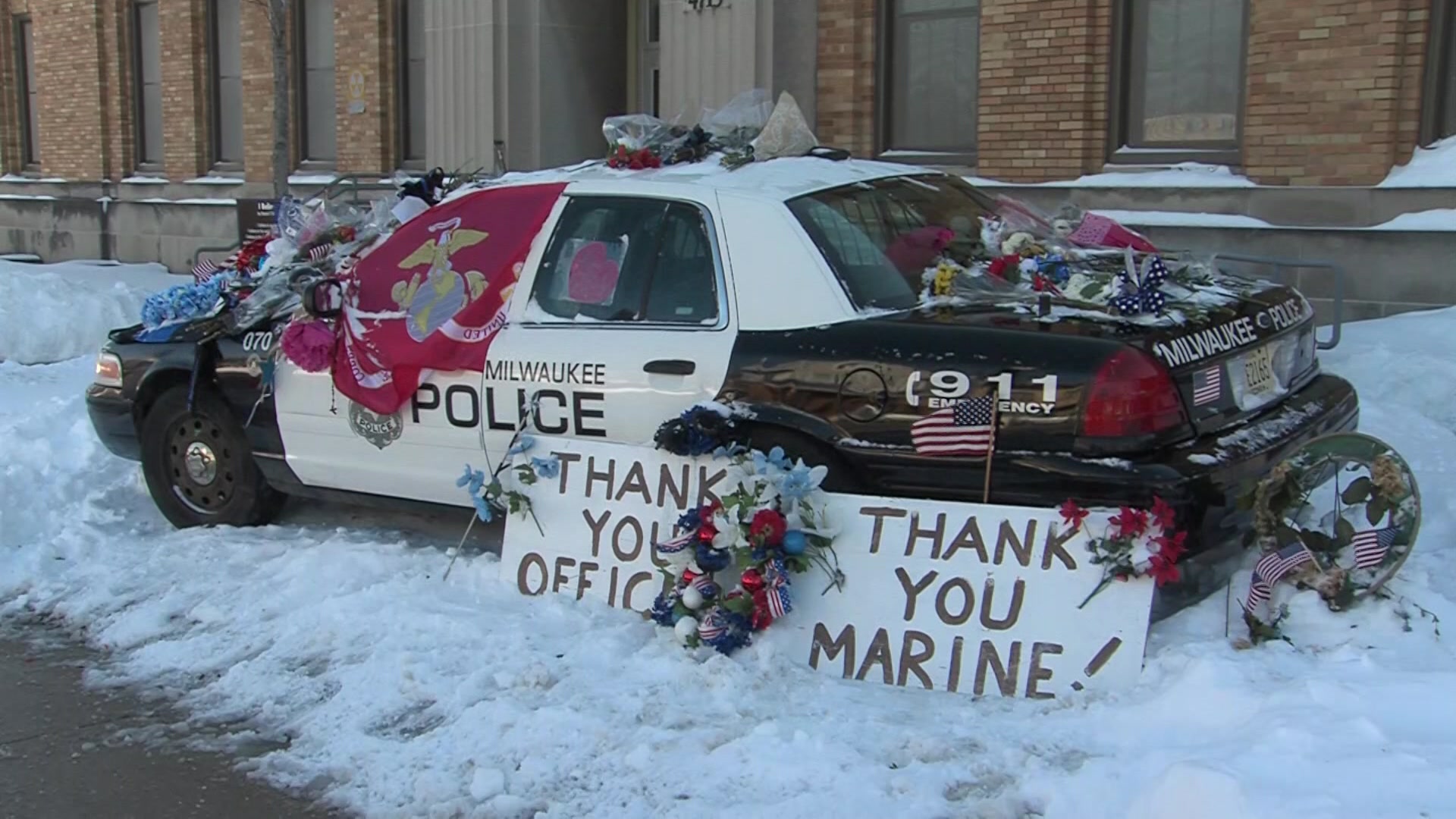 "Thank you for your service and I'm with you in your sorrow," says Bruce Dinmore.

"We love him and appreciate everything he has done for us in the city and for the country and we're just so, so sorry that they are having to go through this," said Julie Kovylinski.

Another woman who went to the visitation says she got a badge and a prayer card with a picture of Officer Rittner and she said she's going to hold it near and dear to her heart.

The procession for Officer Rittner passed by the Marine Corps Reserve Center where he served for several years. Fellow service members gathered there to pay their respects.

Mayor Tom Barrett attended Wednesday's funeral for Officer Rittner, but he did not speak. At an appearance earlier in the day, he called it a somber day but praised Milwaukeeans for the way they've responded to this and another tragedy.

"I have been very impressed by how people have supported the families, supported the department and supported the city and not only for this, but also for the death of Mr. Rodriguez, losing two city workers in 48 hours was something I never thought I would see," Mayor Barrett said.

The Mayor was referring to Bryan Rodriguez, the DPW worker who was hit and killed by a hit-and-run driver last week.

Messages and tributes keep pouring in. A tweet from Summerfest simply said "Thank you for protecting our community Officer Rittner."

We pause today with condolences to the family of MPD Officer Matthew Rittner who died in the line duty one week ago. Our thoughts remain with the entire Milwaukee Police Department family as the hero is laid to rest today. pic.twitter.com/A9kyRLdk7p

Thank you for protecting our community, Officer Rittner pic.twitter.com/Xi7WcMpXPe

One of the more unique tributes came from the Milwaukee Brewers who set up a locker with a jersey with Officer Rittner's name on it in their spring training facility in Arizona. Officer Rittner was a big Brewers fan and he and his wife were married at Miller Park.

The Brewers set up a locker in their new Spring Training clubhouse in memory of Matthew Rittner, the Milwaukee Police Department officer killed in the line of duty last week. pic.twitter.com/hCUEekIEr5

The Milwaukee Police Department has a web page dedicated to the officers who have died in the line of duty over the years. All 64 officers are pictured, along with information about their service and how they lost their lives, dating all the way back to the first officer killed on duty in 1884. Their stories give you an idea of the dangers police face as they put on the uniform every day.

If you'd like to make a donation to help the family of Officer Rittner, they're being accepted at any TCF Bank branch under the account name "Family of Matthew Rittner."