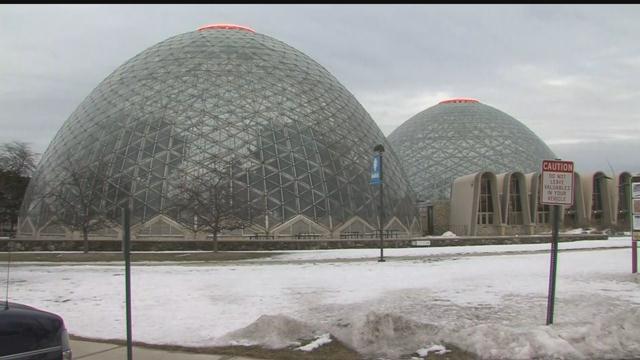 The public was given its first chance to comment on the future of Milwaukee's Mitchell Park Domes Wednesday night.

Hundreds attended a county board meeting held at the Greenhouse next to the domes. That meeting included presentations by county staff, and a chance for the public to offer input on four potential options for the domes.

Officials say a complete renovation would cost between $60-71M.

County Executive Chris Abele is asking for an additional $500,000 for a short term repair on the domes. The county already has $500,000 budgeted to fix the Show Dome. The additional $500,000 would allow the other two domes to be repaired, fixing structural problems for up to 6 years.

Abele hopes to have the Show Dome open by May 1st, with the arid and tropical domes opening later this year.

The Parks Committee could act on a short term plan as soon as March 8th.

“It’s great that as the public gathers tomorrow to begin our community discussion on the long-term future of the Domes it is with the confidence that we have a definitive timeline for safely re-opening the Domes, beginning with the Show Dome on May 1st, as part of a $1 million repair plan I announced yesterday.

“The Show Dome is the most accessible and most utilized Dome, and it will allow for dozens of weddings to be held that had been scheduled at the Domes, which is why we will reopen it first. Engineers have been studying options since last July that will keep the public safe from falling debris while also protecting the plants and maintaining the beauty of the Domes. They've identified a short-term fix that is sustainable for the next several years that meets all those criteria.

“Last year I budgeted $500,000 for repairs at the Domes and that money will allow us to complete the work on the Show Dome. I’ve asked my partners on the County Board to now authorize an additional $500,000 so that we can fund the repairs needed to safely reopen the Tropical and Arid Domes, and I have every confidence that they will do so as quickly as possible since the Domes are such an important cultural asset for us all.

“I look forward to hearing both the Board's good ideas and what the community has to say on the Domes and will continue to solicit feedback from the public in the coming weeks and months. We still need to discuss, as a community, a long-term plan for the future of the Domes. I look forward to continuing this dialogue.”

*NOTE: The County Executive is unable to attend tomorrow evening’s public hearing due to a previously scheduled commitment in his role as Treasurer of the Boys & Girls Clubs of America Board of Governors. He regrets that he cannot personally attend but knows the County is well-represented.

“If elected leaders can afford to spend millions on an arena for out-­of-­state billionaires,
we can afford to preserve and protect cultural institutions important to our community.
Every family deserves access to a quality park. That’s our legacy, and that’s my
promise.”
The current county executive has refused to commit to long-­term solutions to the
crumbling Domes, proposed band-­aid solutions. Senator Larson is committed to
repairing to the Mitchell Park Domes for future generations if he is elected.