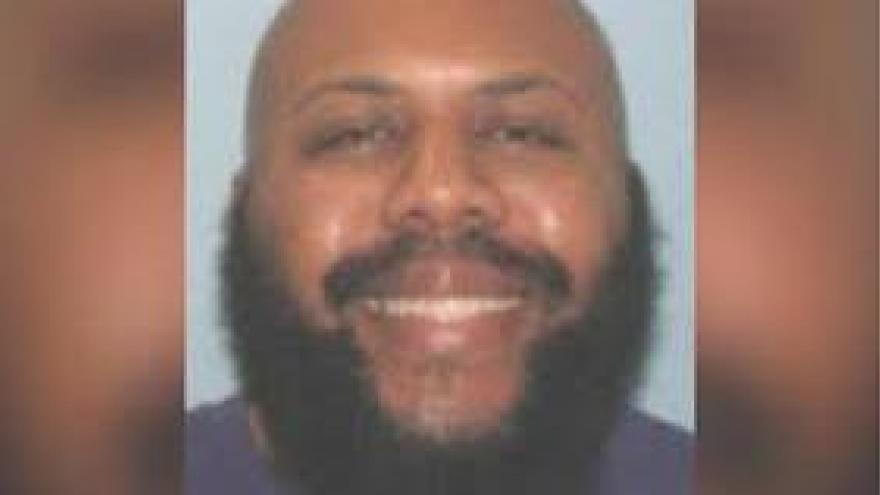 (CBS NEWS) HARBORCREEK Twp., Penn. -- The man who randomly gunned down a Cleveland retiree and posted video of the crime on Facebook killed himself Tuesday during a police chase in Pennsylvania that began when McDonald’s employees recognized him at a drive-thru and attempted to stall him as they contacted police.

It marked a violent end to the nearly 48-hour multistate manhunt for Steve Stephens, who was wanted in the apparently random slaying of 74-year-old Robert Godwin Sr. as he walked on a street collecting cans Easter Sunday.

Acting on a tip from the McDonald’s worker, Pennsylvania State Police spotted Stephens -- a 37-year-old job counselor who worked with teenagers and young people -- leaving the restaurant on Buffalo Road in Harborcreek Township and went after him.

Tom Ducharme Jr., who owns the McDonalds, told CBS affiliate WSEE that Stephens pulled up to the first drive-thru window around 11 a.m., where an employee recognized him and noticed he was driving a Ford Fusion with Ohio tags.

The employee took Stephens’ order and money, then immediately stepped out to call Pennsylvania State Police as Stephens pulled up to the next window, Ducharme said.

Ducharme said employees there “weren’t 100 percent sure, but we had a pretty good idea” that the man was Stephens. Based on that suspicion, Ducharme said he pulled the young woman who was working the front drive-thru window out and approached the suspect through the window with his supervisor.

“We basically told him it would be a minute for his fries, which it wasn’t really, we were just trying to make sure she got in contact with state police,” Ducharme said. “He didn’t want to wait for the fries, which was fine – he took his six-piece and didn’t want any money back and headed out on to Buffalo Road.”

Ducharme said his supervisor was the one who talked with Stephens. The supervisor told him Stevens seemed “nerved up, a little agitated” and said he had to go.

“I’m thinking at that point he might have been thinking someone in the store recognized him, and he was trying to get out of here,” Ducharme said.

Within “30 seconds,” he said, state police had responded and were on Stephens’ tail.

Throughout the incident, Ducharme said his biggest concern was keeping his employees safe. He praised their quick thinking for helping bring resolution to the manhunt that had their community on edge.

“I’ve heard so many people say he can’t possibly be around here, but I looked out my window and I’m like, ‘It sure does look a lot like him,’” Ducharme said. “She was already on the phone at that time – hats off to my crew and the managers that work here, I’m just so proud of how they handled everything.”

Before placing his order, Ducharme said, Stephens had asked another employee who was on break behind the building for directions to the interstate.

“I’m not sure if this was his last stop to get something to eat before he went on his travels, but it didn’t work out that way for him, which is good,” Ducharme said.

Speaking Tuesday, Major William Teper of the Pennsylvania State Police said state police in Erie received a call from a concerned citizen reporting a sighting at the Harborcreek Township McDonalds around 11:10 a.m.

He wouldn’t say whether the tipster worked for the McDonalds, but said the tip was instrumental for investigators.

“Thank God,” Teper said. “Without the public, we would be nowhere. It’s so important to any investigation for the public to step in and help us.”

He praised the tipster: “I thank them from the bottom of my heart.  It’s nice when we’re all on the same team.”

After officers pursued Stephens about two miles from the McDonalds, a trooper used a “precision immobilization technique” maneuver in which they rammed the vehicle, causing it to spin out of control near an abandoned school in Erie, Teper said. As the vehicle came to a stop, Stephens pulled out a pistol and shot himself in the head, Teper said.

A patrol trooper involved with the pursuit struck Stephens’ vehicle, causing minor damage, state police say. There were no injuries to law enforcement or the public.

“This started with one tragedy and ended with another person taking their own life,” said Cleveland Police Chief Calvin Williams. “We would have liked to have brought Steve in peacefully and really talked to him about why this happened.”

Williams also hailed the tipster, as well as the work of local, state and federal law enforcement officials involved in the search. Officers searched dozens of places around Cleveland without finding Stephens before expanding the manhunt.

Authorities had expanded the search nationwide and offered a $50,000 reward for information leading to his capture and prosecution. Investigators had asked residents of five states to be on alert and broadcast Stephens’ image on electronic billboards.

The search for Stephens got underway after he posted a video on Facebook showing himself shooting and killing Godwin, Facebook said. A few minutes after that, he went live and confessed, the company said.

The case brought another round of criticism down on Facebook over how well it polices objectionable material shared by users.The chilling video was just the latest instance of crime footage being shared on social media.

Facebook CEO Mark Zuckerberg expressed condolences during a speech Tuesday at F8, an annual conference of developers who build products for the social media site.

“Our hearts go out to the family and friends of Robert Godwin Sr.,” Zuckerberg said. “And we have a lot of work and we will keep doing all we can to prevent tragedies like this from happening.”

Police would not speculate as to what motivated the killing, but videos Stephens posted showed him talking about losing everything he had to gambling and trouble with his girlfriend.