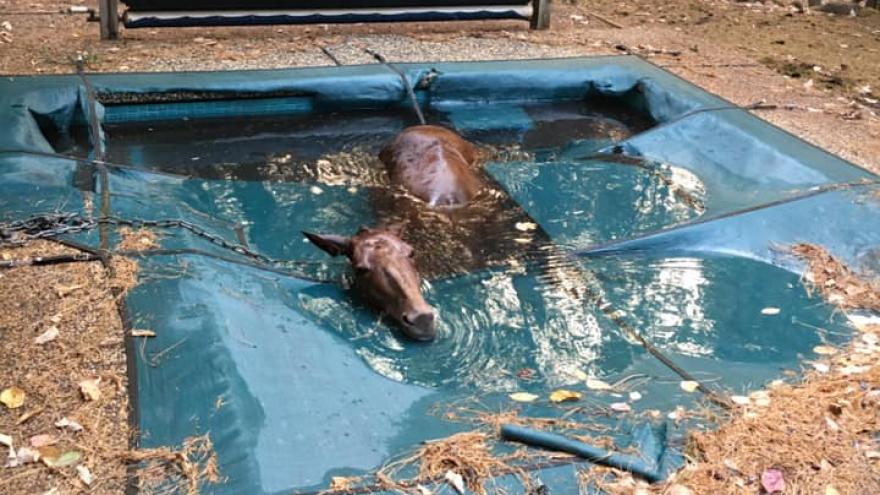 Jeff Hill of Paradise, California, was checking on someone's house after the Camp Fire nearly leveled the entire town, and what he found in the backyard startled him.

It was a horse "shivering uncontrollably," Hill wrote on Facebook. He found the horse in the backyard pool, suspended by a pool cover.

The horse "had the look of defeat in her eyes," Hill wrote. But thanks to the pool, she was spared from the deadliest wildfire in California history.

The Camp Fire, north of Sacramento, is one of several deadly wildfires raging in California. It has killed at least 48 people and countless animals. Some 52,000 residents evacuated the area, but many animals had nowhere to go.

Hill said it's unclear how long the horse was in the pool. Because of the pool cover, she was able to sit in the water without drowning until the fire has passed, he wrote in his now-viral post.

Hill said the group he was with scrambled to unhook the pool cover, pull the horse to the shallow end, and guide her up the pool steps. "She got out, shook off, loved on us for a few minutes as a thank you and walked off assuring us that she was ok," Hill wrote.

The photos of the horse stuck in the pool are heart-wrenching, but she is a survivor. Thanks to her own quick thinking and Hill's help, she was able to make it through the wildfires. "Among all the sadness I had a glimpse of happiness today," Hill wrote.