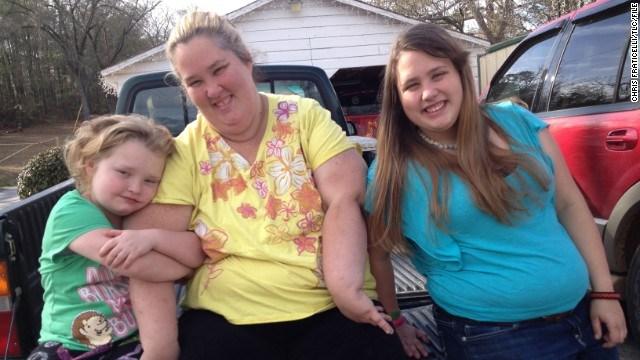 Honey Boo Boo's mother is coming clean about her past, which she says includes her involvement with a second sex offender.

In an exclusive interview with \"Entertainment Tonight\" to begin airing Thursday, reality TV matriarch June \"Mama June\" Shannon explains why she was seen in the company of Mark Anthony McDaniel, a man who served 10 years in prison after being convicted of aggravated child molestation in 2004 and who is a registered sex offender.

Shannon also says the father of two of her children is another man who was convicted of a sex crime.

\"Shannon also revealed for the first time her claim that Pumpkin's biological father is also the father of her 18-year-old daughter Jessica,\" according to ET online. \"His name is Michael Anthony Ford, he is a convicted sex offender who served time for sexual exploitation of minors after being caught on 'To Catch a Predator' in 2005.\"

Her rumored involvement with McDaniel -- who was recently released after serving a 10-year sentence -- touched off a firestorm that resulted in the cancellation of the popular TLC reality show \"Here Comes Honey Boo Boo\" in October. The show centered around Shannon and her family, including 9-year-old daughter Alana \"Honey Boo Boo\" Thompson, who came to fame competing in child beauty pageants.

It was announced in September that Shannon had split with Alana's father, longtime love Mike \"Sugar Bear\" Thompson.

Shannon's oldest daughter, Anna \"Chickadee\" Cardwell, 20, has said McDaniel molested her when she was 8.

Shannon told ET's Brooke Anderson that she does believe \"that something happened\" between her daughter and McDaniel and that she's \"told Anna not to bring up the past again. It would be hard for me.\"

She said she's seen him only twice since his release, once coincidentally and once at an arranged meeting for her 14-year-old daughter, Lauryn \"Pumpkin\" Shannon, who grew up believing McDaniel was her father.

\"Jessica and Pumpkin have the same dad, but Jessica's dad has had nothing to do with her over the years,\" she said. \"So, why the hell would I open up that can of worms until today? I lied to my family and told them it was somebody else.\"

Shannon said she wanted to do the interview to clear the air.