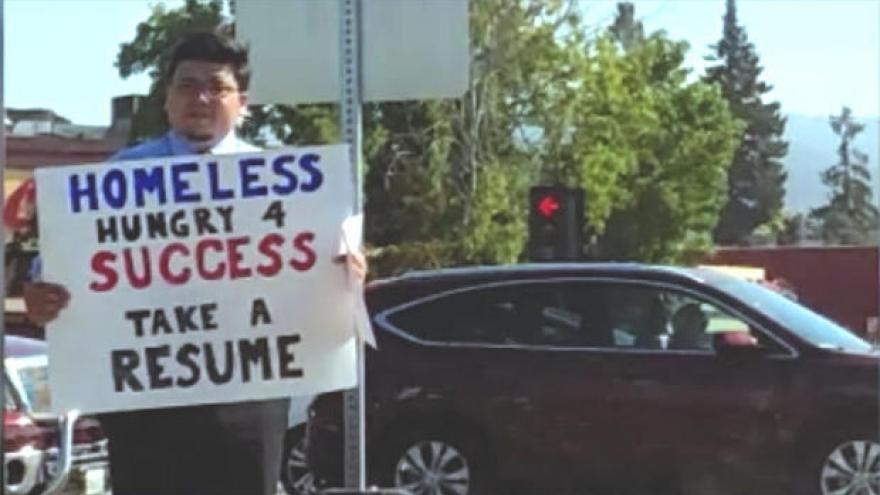 (CBS NEWS) -- Jasmine Scofield was driving in Mountain View, California, on Friday and spotted a man standing by the side of the road with an unusual sign. He wasn't asking for money, he was asking people to take his resume.

"I had just finished my last day of work at my previous job and was driving to meet my coworkers for a party," Scofield told CBS News. "I was driving to a restaurant... and I saw David," she says. David Casarez told her he'd been living out of his van while searching for jobs in Silicon Valley. He was holding a sign that read, "Homeless, hungry 4 success. Take a resume."

Today I saw this young homeless man asking for people to take a resume rather than asking for money. If anyone in the Silicon Valley could help him out, that would be amazing. Please RT so we can help David out! pic.twitter.com/ewoE3PKFx7

"As I saw his sign, the light turned red and I said, 'This is perfect,'" Scofield says. She rolled down her window and called Casarez over to her car. "I grabbed a resume and asked him what he did," she says. He said he was an experienced web developer and like most people in Silicon Valley, was looking for work in the tech industry.

Before she drove off, she took a photo of Casarez and his sign. "I yelled out, 'Do I have your permission to post this on Facebook and Twitter?' And he said yes," she says. "That was the last time I saw him."

It was not, however, the last time she heard from him. Later that night, Scofield realized her posts on social media were blowing up.

"I spent 20 to 30 seconds writing the tweet and Facebook post and by the end of the night, it hit almost 10,000 shares. I called him and warned him, and I said, 'Hey, I'm the girl who took your resume and it's going viral,'" Scofield says.

Casarez told Scofield he was already getting emails and calls from people who had seen her photo of him. Scofield says she and Casarez spoke on the phone for an hour that night, and he told her more about his journey.

"He told me about his dream to come to Silicon Valley to start his own business and app. He cashed out his 401(k) to come here," she says. "The van he was living in was repossessed... It was his Hail Mary time, his make it or break it moment. To make it work, he put his ego aside to hand out resumes on the street."

Casarez told Scofield his freelance work as a graphic designer was giving him enough income to eat and clean his clothes, but not enough to keep a roof over his head in one of the nation's most expensive housing markets. "He told me that he had been interviewing, and most of the time they were rejections. ... The most memorable one that he told me about was interviewing at Apple," Scofield says.

What brought Casarez's to Silicon Valley was an app idea called "Mesa," which helps mom-and-pop food businesses scale up and reach the masses, CBS SF Bay Area reports. "I want to do something that will put my name out there, make a mark on society," Casarez told the station. After moving to California from Texas, he burned through his savings and was swimming in $80,000 worth of student loan debt.

Scofield said she was very impressed with Casarez's resume. "It was a shock. He designed his resume to look like a web page. I thought it was so unique and rare," she says. "I've never seen a resume like it ... and just the work alone was impressive."

"It hurt to see he couldn't get [a job] at the time," Scofield said. Several people responded directly to Scofield about Casarez, offering him job interviews, she says.

"I've been pretty close to his situation before. I really understand how difficult it is to find work in Silicon Valley," said Scofield, who is a makeup artist. "It hit really close to home for me…. I was determined to help him." By Monday, Scofield's tweet had gotten over 130,000 retweets, and she had helped Casarez get support from others.

CBS News has not independently verified if Casarez was homeless, but one Silicon Valley executive said he's offered to help the man with housing. "[We] sent him an Airbnb gift certificate, he's trying to make it without it because he is independent," Austen Allred, the CEO of Lambda School, a business that teaches coding, told CBS News via message. "We're also paying for his transportation to interviews."

Allred is unsure if Casarez actually used the Airbnb gift certificate, noting that "he wanted to try as hard as he could to make it without handouts. So far as I know he's still living in the park."

Scofield says the last text Casarez sent her said he was getting so many messages it was hard to reply to them all.

"You can see my inbox is a bunch of emails that I still have to go through," Casarez told CBS SF Bay Area as he scrolled through his inbox. "Please bear with me as I try to get back to you."

"I just hope that this sort of sends out a message for people to see the good in others and that helping your peers could be life-changing for them," Scofield says.