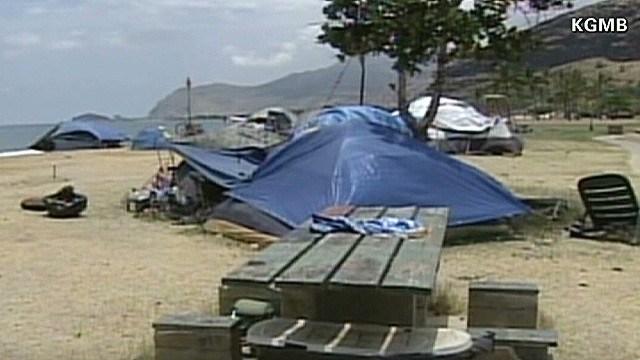 (CNN) -- Hawaii is a place many go to kick back, relax and enjoy the good life.

But for others, it's a land of struggle.

That's why its governor on Friday signed an emergency proclamation to tackle homelessness in the state, saying the measure will help turn around the lives of young and old.

"Homelessness remains a serious issue in every county throughout the state," Gov. David Ige said in a press release.

Hawaii has an estimated 7,620 homeless people, said the governor's spokeswoman Cindy McMillan, citing a 2015 statewide count. This may not seem like much compared with other places -- to this point California has about 114,000 homeless, New York has more than 80,000 and Texas about 28,500, according to the United States Interagency Council on Homelessness -- but it's all relative to the state's total population.

At 465 people per 100,000 citizens, the Aloha State has the highest rate of homelessness per capita of any of the 50 states, according to Scott Morishige, the governor's point person on this issue. Hawaii's population is about 1.36 million, according to the U.S. Census Bureau.

Specifically, the emergency proclamation allows the spending of over $1.3 million to fund homeless services and help set up permanent homes for families and the chronically homeless. The latter effort will include building a transitional housing facility for homeless families.

"The biggest deficit in the system is shelter space for families," Ige told reporters.

While governments' emergency proclamations are often linked to natural disasters or other such calamities, they have been used before to address more systemic issues like homelessness.

Last month, for instance, the Los Angeles City Council declared a state of emergency on homelessness and called for $100 million to address the crisis. Figures from the L.A. Homeless Services Authority found that homelessness had increased 12% in two years in the Southern California city.

"We all understand the urgency that this situation requires, and what is at stake," Los Angeles Mayor Eric Garcetti said then. "... If we can lift up those in need, and pick up those left behind, then we can live up to the best of our ideals."