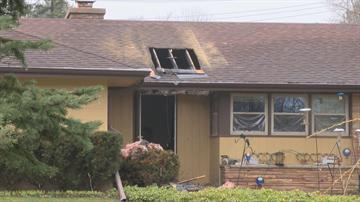 BAYSIDE-- A fire broke out at a home on Tennyson Drive in Bayside early Sunday morning.

The homeowner called 911 around 7:30 a.m. saying that there was smoke coming from the roof.

The resident and two pets who were home when the fire broke out were able to safely the property on their own.

The area of Bayside where the home is located has no fire hydrants, so firefighters had to shuttle water in.

Fire damage was contained to the attic of the home, but there was smoke and water damage throughout the first floor of the home.

The fire started in the attic just above the front entryway of the home.

There were no smoke detectors in the home.

The North Shore Fire Department wants to remind everyone that working smoke detectors on every level, as well as inside and outside of every sleeping area of the home provides early detection and saves lives.