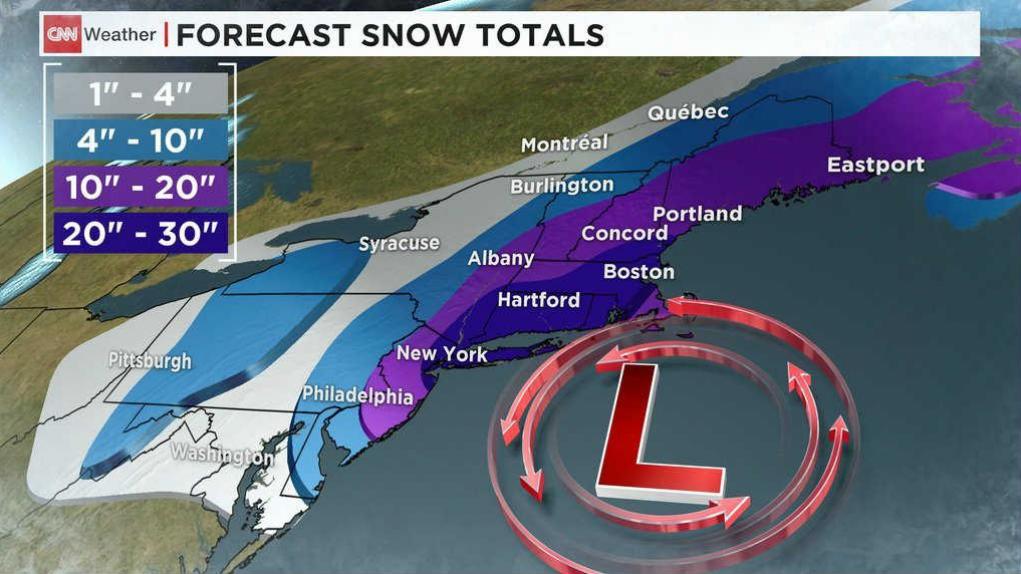 That's the message government officials across the Northeast offered residents Monday ahead of what could be a blizzard of historic proportions bearing down on the region.

\"It is no joke to have people stranded on a highway. We've gone through that before,\" New York Gov. Andrew Cuomo told reporters. \"It is frightening how quickly a simple trip to the supermarket can wind up being very dangerous.\"

Public transportation will shut down and only emergency vehicles will be allowed on the roads in 13 counties -- and on the streets of New York City -- as of 11 p.m., he said.

Roads are already dangerous, said Cuomo, who has already declared a state of emergency and called out the National Guard. And it's going to get worse.

The National Weather Service, which isn't prone to exaggeration, is using terms like \"life-threatening\" and \"historic\" to describe the weather system taking aim at the Northeast, with the worst expected to hit Monday night into Tuesday.

The governors of Connecticut and Massachusetts also put travel bans in place.

\"It's going to be the kind of night where the best thing anybody can do is stay inside,\" Massachusetts Gov. Charlie Baker said Monday evening.

The first big storm of the year may drop up to 3 feet of snow on Boston and New York before it ends Tuesday, with freezing rain and strong wind gusts possibly reaching 70 mph. Blizzard and winter storm warnings have been issued from Maryland through Maine and into Canada.

Up to 58 million people could be put into the deep freeze. And the storm could have a far-reaching economic and political impact, even beyond the region directly hit.

\"I want everyone to understand that we are facing -- most likely -- one of the largest snowstorms in the history of this city,\" New York Mayor Bill de Blasio said.

While the worst of the weather isn't expected to hit until late Monday into Tuesday, according to CNN forecasters, it's already snarling travel.

More than 6,000 flights have been canceled for Monday and Tuesday, Flightaware.com said.

\"We plan to resume operations as soon as it is safe to do so,\" airline spokeswoman Andrea Huguely said.

Delta has canceled more than 1,600 flights on Monday and Tuesday. There are no operations planned at Boston's Logan International Airport on Tuesday and \"very limited flying at LaGuardia and JFK,\" spokesman Morgan Durrant said. Some cancellations may also be necessary Wednesday morning, he said.

The major U.S. airlines are offering fee-free rebooking of flights to and from the Northeast on Monday and Tuesday.

Amtrak plans to operate a normal Monday schedule but may re-evaluate later in the day.

Stocking up before the storm

The storm will come in waves, with the New York, Boston and Philadelphia areas seeing light snow Monday morning and heavier snow in the afternoon, CNN meteorologists say.

The really heavy snow will begin Monday night and continue through Tuesday. Some areas will still be getting snow Wednesday.

Officials across the Northeast warned residents to stock up for the storm ahead of time.

While shoppers lined up in supermarkets, Dorot, a nonprofit in New York, collected hundreds of bags of food and water supplies for homebound seniors, WCBS reported.

\"I think I'll use some of this, especially the soup,\" said Norma Amigo, 93, of the Upper West Side. \"I will not go out if I think it's slippery out, because I fell two weeks ago.\"

Christine Carew, a sales associate at Charles Street Supply in Boston, said customers have been coming into the hardware store since it opened Sunday to grab sleds, shovels, ice melt and snow brushes.

When it comes to getting ready for a massive snowfall, she said, Boston residents know what to do.

Fleets of plows and tons of salt

The National Guard also was positioning six dozen personnel and 20 vehicles throughout the state Monday morning.

In Boston, New England Patriots fans saw their beloved football team off to the Super Bowl at a Monday morning celebration that wrapped up before the storm worsened.

Boston Mayor Martin Walsh said there was no doubt the city would be slammed, so a major effort now is making sure that people are safe. That includes checking on elderly residents and working to get homeless people off the streets and into shelters, he told CNN.

\"You can't fight mother nature, and whatever happens throughout the course of the storm, we just have to do our best to be prepared going into it, which I think we are,\" Walsh said.

On Plum Island, Massachusetts, Bob Connors said he'll try to ride out the storm but will move to higher ground if things get dicey, according to CNN affiliate WHDH. A 2013 storm destroyed homes on the island.

\"When you're living on the edge of paradise like we are now, you give Mother Nature a lot of respect when we need to,\" said Connors.

\"This is not one of those storms you want to go out in while it's happening,\" Jones said. \"You want to wait for the winds to die down ... before you go to the store.\"

Tuesday is shaping up to be a day when the reality of the weather sets in.

One of the inevitable aftereffects of snow -- flooding -- will quickly become a problem.

There could be coastal flooding in Massachusetts starting early Tuesday, with pockets of major flooding on east-facing coastlines, the state emergency agency said.

\"Plan to work from home is the best advice for Tuesday,\" Jones said.