Historians baffled by handprint on Declaration of Independence 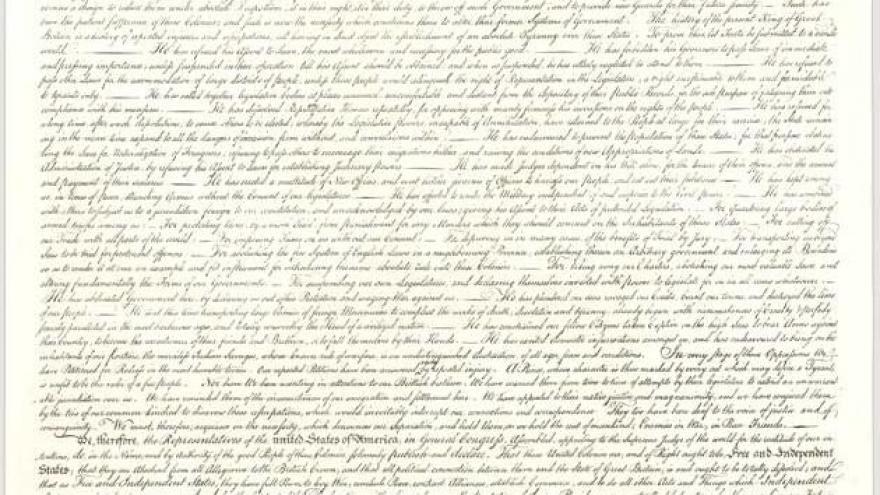 Washington (CNN) It's one of the nation's most important founding documents but the Declaration of Independence -- the document that paved the way for the creation of the United States -- hasn't always been treated with the care you might expect.

Since it was signed in 1776, the Declaration was haphazardly transported around the country in carriages, a sailing ship and even an unprotected car.

"It was terrible," said David Ward, senior historian at the National Portrait Gallery. "It was put in a burlap bag. They rolled it up all the time, which you're not supposed to do. It was exposed to light, it was exposed to smoke."

And at some point along the way, someone slapped a big, dirty handprint on the bottom left-hand corner—and never fessed up to it.

The dark smudge on the nation's famed document has baffled historians for years.

Was it an unwashed founding father, as he leaned over the parchment on that hot summer day in eighteenth century Philadelphia? Or maybe it was the print-shop owner who reframed the document in 1888? Was it Nicholas Cage when he stole the Declaration of Independence in National Treasure?

To attempt to unlock the secret of this age-old historical mystery, CNN Politics followed the path of the document in Washington, an exploration that took us to the underground Conservation Lab at the U.S. National Archives, the halls of the National Portrait Gallery and the Library of Congress.

Maybe this Fourth of July will be the year this secret is finally revealed.