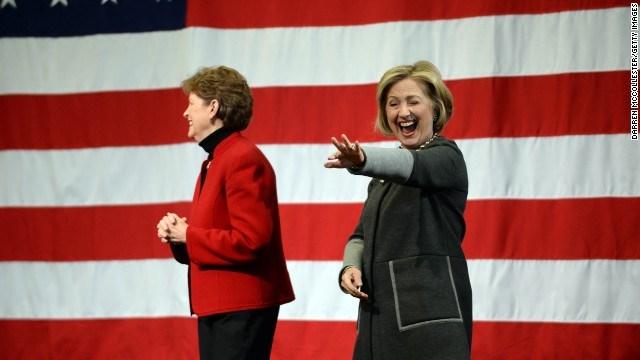 Users of Grindr, the leading gay hookup app, have voted Hillary Clinton their \"Straight Ally of the Year.\"

The former secretary of state joins a slate of other noteworthy figures highlighted in Grindr's 'Best of Awards' for 2014, including Neil Patrick Harris (voted \"Gay Icon of the Year\" for the second year in a row) and Vladimir Putin (voted \"Enemy of the LGBT Community\").

While Clinton's team has not responded to request for comment, it seems likely she would welcome the positive reaction from Grindr's gay users.

Clinton did not publicly support same-sex marriage until last year, after she stepped down as secretary of state. During a testy interview with National Public Radio this summer, she said she couldn't wade into politics while serving in what is supposed to be an apolitical position and, before that, to her upbringing to explain her lack of support for same-sex marriage.

\"I did not grow up even imagining gay marriage and I don't think you probably did either,\" Clinton told NPR's Terry Gross.

\"This was an incredibly new and important idea that people on the front lines of the gay rights movement began to talk about and slowly but surely convinced others of the rightness of that position. And when I was ready to say what I said, I said it,\" Clinton said, pushing back on the suggestion that she supported same-sex marriage but was waiting for it to be politically advantageous position to take.

Grindr users \"Biggest prediction for 2015\" is that Clinton will announce her presidential campaign, a move that is all but certain now that Clinton's timeline for an announcement appears to be slipping toward the spring.

It's not a scientific poll, to be clear, though a representative for the site did point out to CNN that what was supposed to be a joke poll of Grindr users on whether Scotland would vote for independence from the United Kingdom turned out to be just 1 percentage point off the actual vote, a more accurate result than actual pollsters reported the night before Scots went to the ballots.