Hillary Clinton: "This is Painful, and It Will Be for a Long Time" 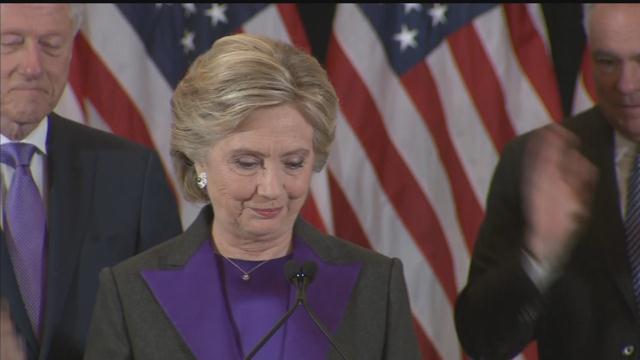 (AP) Hillary Clinton says she's "sorry" she didn't win the election, adding "this is painful, and it will be for a long time."

The Democratic presidential candidate was delivering what her campaign billed as a concession speech to Republican Donald Trump after his upset victory in Tuesday's election. She spoke at a New York hotel.

With her onstage are husband Bill Clinton and daughter Chelsea Clinton.

She's urging her supporters to accept the results, saying they owe Trump an "open mind" and a "chance to lead." She says American democracy depends on "peaceful transition of power."

Speaking to supporters Wednesday at a New York hotel, Clinton said the campaign has been "one of the greatest honors" of her life. She describes the outcome as "painful," but says the effort was not about her but "the country we love."

Ashen-faced aides sat in the front row as supporters in the audience sobbed at the emotional event.Hillary Clinton's running mate, Tim Kaine, says the defeated Democratic candidate has made history by paving the way for women to run for president.

Speaking ahead of Clinton to a room of supporters and aides in New York Wednesday, Kaine prompted a standing ovation when he noted Clinton is leading in the popular vote in the race against Donald Trump.

He hailed Hillary Clinton and former President Bill Clinton's loyalty to their staff, and praised their dedication.

His voice shaking, he said that Clinton "knows the system we have. She's deeply in love with it and she accepts it."