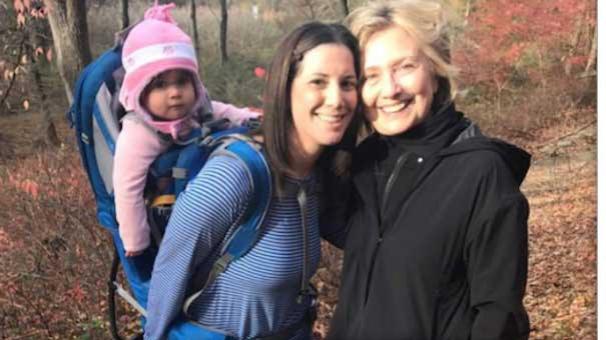 (CBS NEWS) A New York woman who went for a hike in Chappaqua Thursday got a surprise when she ran into Democratic nominee Hillary Clinton on the trail.

The woman, Margot Gerster, posted about the encounter on Facebook Thursday afternoon, saying she took her daughters for a walk because she has been “so heartbroken” about the results of the presidential election. Clinton conceded the race at an event in New York City Wednesday morning.

“As we were leaving, I heard a bit of rustling coming towards me and as I stepped into the clearing there she was, Hillary Clinton and Bill with their dogs doing exactly the same thing as I was,” she wrote.

“I got to hug her and talk to her and tell her that one of my most proudest moments as a mother was taking Phoebe with me to vote for her,” she said. “She hugged me and thanked me and we exchanged some sweet pleasantries and then I let them continue their walk.”

“Now, I’m not one for signs but I think ill [sic] definitely take this one,” she continued, tweeting #iamstillwithher, a reference to the popular pro-Clinton hashtag #ImWithHer. “So proud.”

The Clintons own a home in Chappaqua, which is about 40  miles north of New York City.