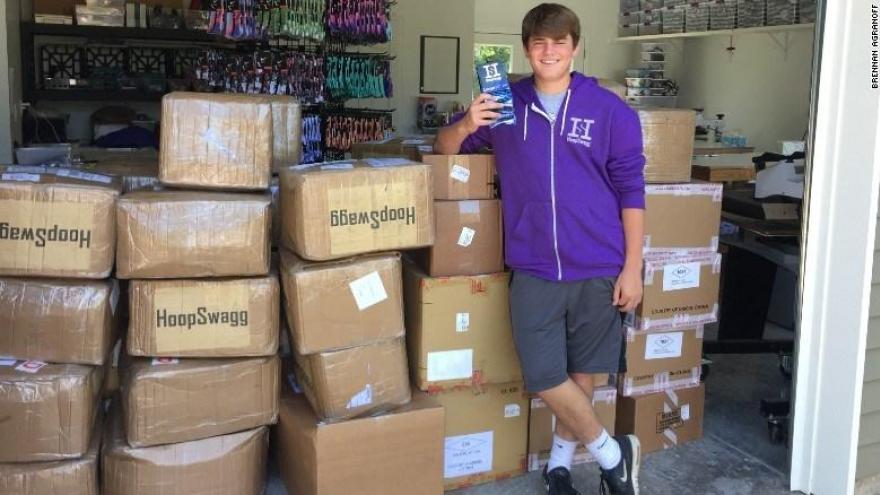 Brennan Agranoff is a 17-year-old with a lot on his plate.

The high-school junior balances homework with another full-time job he's had since he was 13: He's founder and CEO of HoopSwagg, a custom socks startup.

HoopSwagg isn't just a little project on the side for this teenager. In four years, Agranoff has grown his idea to make custom-design athletic socks into a profitable online-only business with annual sales of more than $1 million.

Agranoff's lightbulb moment came in 2013 at a high-school basketball game, where he noticed most kids were wearing the same plain Nike athletic socks. If these simple socks started such a craze, he wondered: What would happen if he kicked things up a notch and printed custom designs on them?

Fast forward four years, and HoopSwagg now offers more than 200 original designs created by Agranoff himself: a mix of goofy (a melting ice cream cone), funky (a spoof of the infamous Portland International Airport carpet) and tongue-in-cheek ("goat farm," a family inside joke scattered with photos of the real animals on the family's property). Agranoff also wants to allow customers to create their own designs in the future.

The company is now shipping 70 to 100 orders a day, with each pair of socks priced at $14.99. And this week, HoopSwagg announced its first acquisition: It bought competitor TheSockGame.com, which will add over 300 designs to the portfolio and help expand HoopSwagg's customer base.

But HoopSwagg started small. After Agranoff's initial idea at the school basketball game, he spent six months researching logistics like machinery and technology needed for custom digital printing on fabric.

He then made the case to two potential investors: his parents. "They thought the concept was a little out there," Agranoff said. But he was persistent and ultimately received a $3,000 loan.

In true startup fashion, HoopSwagg launched in the family garage in Sherwood, Oregon, just outside of Portland. Agranoff set up the design printing and heat presser machines with his family's help. He enlisted his parents to buy "as many white athletic socks as they could get from Dick's Sporting Goods."

Hoopswagg's first year was slow. But momentum grew quickly after the socks -- which Agranoff said are "for everyone from 6-year-olds to 80-year-olds" -- took off on social media.

Related: Stores are scooping up this nut-free ice cream

Agranoff leveraged his own social network and targeted a group of social influencers to help spread the word. In particular, the sock design inspired by the Portland airport's former teal-and-geometric-shape pattern went viral, bringing more attention to the brand.

As sales soared, the company quickly outgrew the garage. The Agranoff family built a 1,500-square-foot building on their property to accommodate production, warehousing and shipping.

His mother joined the business full-time, and Agranoff also has 17 other part-time employees. But self-sufficiency is key to his success, he said. Agranoff also taught himself to code, so he could better set up and manage his business' website, and how to use graphic design tools to develop the designs. He remains the company's only graphic designer, though he is colorblind.

Related: A cloth slow cooker is empowering rural women around the world

For now, the socks are primarily sold through HoopSwagg's website and via Amazon (AMZN, Tech30), eBay (EBAY) and Etsy. The next three years are pivotal for HoopSwagg, said Agranoff, who wants the brand to be in retail stores," said Agranoff. He's also expanding customization to other products like shoelaces, arm sleeves and ties.

Meanwhile, Agranoff is set to graduate high school six months early. While college is in the plan at some point, he's slated to focus on HoopSwagg full-time after high school graduation. He currently spends about six hours per day on the business, after putting in a day of school and finishing his homework.

While Agranoff has never taken a business class, he learned a lot by buying items at garage sales and selling them on eBay -- a pursuit he began when he was eight.

"So really, I've been learning how to do this for a while," said Agranoff. "Especially today, with all the information available on the internet, you can't be too young to learn how to be an entrepreneur."