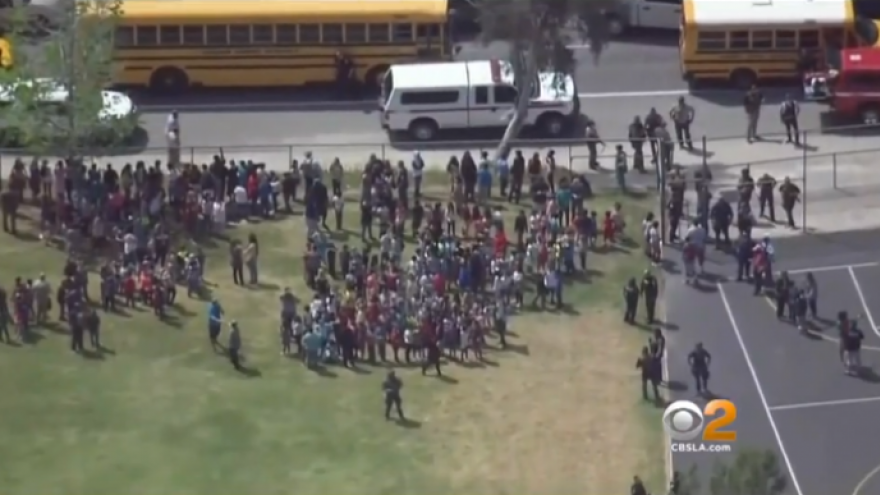 SAN BERNARDINO (CBSLA.com)   —  Parents got the chance to thank the many people they called heroes in the Monday morning shooting at an elementary school in San Bernardino.

Parents meet teachers all the time, but the teachers of North Park Elementary were singled out for special praise this evening. So were first-responders. Even a custodian was lauded as a hero.

CBS2’s Crystal Cruz said what these adults did was incredible — many of them protectively hovering over the children like mother hens.

“It was the teachers who stayed calm and made sure our kids were taken care of,” said one man. “And I really appreciate that as a parent.”

Praise was heaped on teacher JoyElla Bueler who Cruz learned helped save Nolan Brady’s life.  He’s the 9-year-old whose parents released a photo of him Wednesday recuperating in the hospital.

“Darlene got on 911 and I just applied pressure and talked to him. And he was my hero and I’m just glad that he is going to be OK,” said Bueler, choking back tears.

“I won’t forget his smile this morning. It was just fantastic. Pinched his little cheeks. He had a big smile. He’s doing well,” Marsden said.

The school custodian was also praised for saving a child after hearing the shots on campus.

“That woman saved my child’s life. She saved his life,” said a grateful parent.

For her part, the custodian said she wasn’t a hero, just doing her job.

“I was just telling him to go inside and he was like ‘why why’ and I was like don’t ask anything and I just pushed him in and went inside and told the  librarian just keep him inside, just go to the back door,” Edna Gamarro.

At Wednesday night’s  meeting parents and teachers recommended to the board some safety measures the school needs.

“We do need doors that lock,” said one teacher.

Many parents and teachers don’t want the district to close the school. They want to return to North Park. Some begged.

“I’m here to ask the board to allow my son to return to the only school he’s ever attended,” said one parent.

The school board voted to re-open the school on Monday.

In a private meeting Thursday, students, school administrators, teachers and staff will all talk about how to move forward.