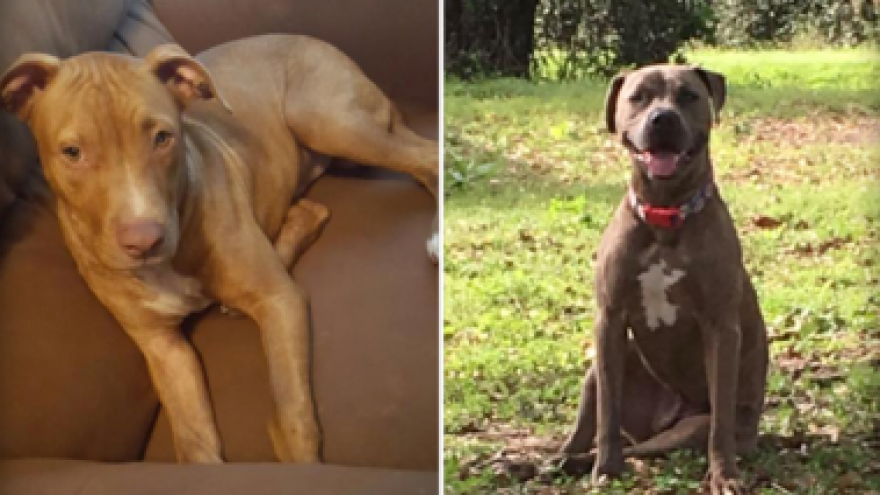 Melissa Butt was enjoying a sunny Sunday afternoon outside with her two grandchildren when she heard an alarming bark coming from two of her dogs.

The pit bulls were standing in front of her 4-year-old grandson and 1-year-old granddaughter, staring at a patch of grass three feet away from Butt's front door.

"The dogs started acting a little funny," Butt told CBS News. "They were barking and barking."

"My Slayer takes over all of those situations," Butt explained. "He's ultra protective of the family."

When the snake struck Paco, biting him in the elbow, Slayer attacked. The pit bull picked the snake up with his mouth, killing it.

"He almost bit him in half," Butt recalled.

Unfortunately, Slayer didn't escape scratch-free. The snake bit the 80-pound dog twice in the face, causing his snout to swell to almost twice its size within 30 minutes.

Both Paco and Slayer were rushed to an emergency vet, where they were given injections of antivenin, intravenous pain medication and anti-nausea meds.

At first, Butt wasn't sure if Slayer would make it. Fortunately, with donations from a local non-profit called Frankie's Friends, Slayer was able to get the treatment he needed to survive.

"Pit bulls are nanny dogs. That's actually why they were originally bred — to care and protect children," Butt said. "And our Slayer has always been that way."

Butt said Slayer is getting released from the vet on Wednesday, and hopefully, everything will return to normal. But first, Butt added, the family is going to try make sure their home, including their yard, is snake-proof.

"We knew when we moved here there would be the risk of alligators, bob cats, hawks, field mice and things of that nature. None of my research told me about venomous snakes," Butt said. "My husband and I are both big researchers, do it yourselfers. Our boys are our boys and we've already started the process to make our yard a little less snake friendly."