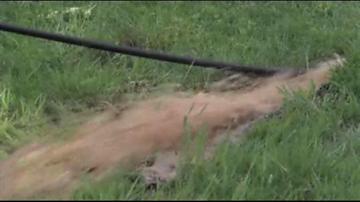 MEQUON-Roto Rooter had 13 different crews out on the road Wednesday after heavy rains caused all sorts of property damage, the most severe being basement flooding.

Crews were not only pumping water out but clearing away wood chips, leaves and other debris that was clogging gutters and drains.

Combined sewage is a mix of toilet water and storm runoff.

In situations like this, it's waste that ultimately ends up in Lake Michigan.

According to MMSD, since the deep tunnel first came on line in 1994, the amount of waste dumped into the lake has been dramatically reduced.

The reason they do that is to keep the waste from backing up into people's basements.

But that's still not enough to keep the water out of some basements.